Matchbox was Peter Hajek’s IPP exchange puzzle in 2007. Peter took care of the design himself (with some technical advice from Frank Chambers on the internals) and then Ken Stevens manufactured them expertly in Corian. It’s a sturdy little puzzle that could probably do some damage if you ever hurled it at an intruder. 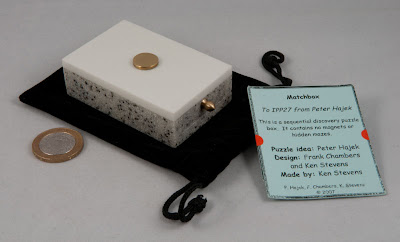 It’s a little bigger than an ordinary matchbox and appears to have a drawer that refuses to slide out. There’s a little brass knob attached to the alleged drawer, and a flat brass button thingy on the top of the box.

There are a couple of holes on the sides of the box that you might not notice at first because of the camouflage effect of the speckled Corian on the sides. Nothing else interesting strikes you about this little box made of rock … other than some gentle rattling inside – matches, perhaps?

Open the box and then reset it for the next victim.

When Louis and I went around to Wil Strijbos’ place, Wil had placed his copy on the coffee table for us to have a bash at.

Louis had a crack at it and made some pretty good progress fairly swiftly, releasing a tool (it’s a matchbox, I’m sure you can work out what the tool was!) – he then spent a while experimenting with what the tool might be capable of and found some interesting things to do with it, but none of them seemed ‘enough’ – it was almost as though he needed another tool – but finding the second one turned out to be a lot harder … although once you find the second tool, opening the box and then resetting it, is an absolute doddle!

The Matchbox is an excellent puzzle that uses a couple of preconceptions about what you can do and what you can’t do to tie you in absolute knots – and it will put a fat grin on your face when you crack it!

After Louis had opened it, Wil mentioned that he had a spare Matchbox if I was interested – it’s on my desk as I write this! Thanks Wil.
Posted by allard at 10:23