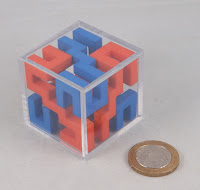 After he’d established that none of us at MPP3 were attending IPP31 (none of us move in those lofty circles yet!) he’d teased a couple of folks with a quick shot at one and it seemed to go down pretty well.. I was dashing around keeping people fed and watered so only saw one from a distance that day, and when it duly went and won a First Prize, I knew I’d have to get myself one at some point ... so back in December I got hold of Richard and as luck would have it he had a couple of pre-dyed copies available so I took one off him.

It arrived in a rather snug clear acrylic box – that I suspect is a golf ball presentation box – but not having seen one of these before, it took me embarrassingly longer than it should have to even open the little box! Having successfully extracted the puzzle, playing commenced... 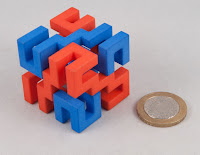 Superstrings consists of two intertwined pieces that each have four diagonally connected cubies on an open chain – those two bits then interlock so that you end up with a 2*2*2 cube with diagonally matching colours. [If that doesn’t make sense, just look at the pictures – all will become clear!]

Starting out it soon becomes apparent that even though it looks like there’s a huge amount of space in there – those pieces are shaped just the right way to stop you from doing most of the things you’d like to do ... despite that, there is a bit of movement to explore and from the first few moves it looks like this is going to be a nice, well-behaved orthogonal puzzle – a little way in you’ll find the pieces have opened up a bit and given you a bit more room to work with, but there’s no way out – until you notice that in some positions, there’s just enough room to twist one piece past another – UH OH... that’s not a good sign – and then thinking back to the other puzzles that Richard’s designed and produced, it was probably inevitable that there’d be twists and turns involved, wouldn’t there? 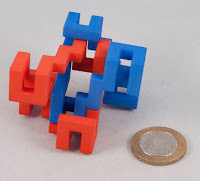 Right, so having passed that little test, more experimentation and fumbling along will part the two bits...

But that’s the easy part – putting them back together again is quite a bit harder – you’ll find quite a few dead ends that seem to have been set up especially for the impatient puzzler wanting to get straight to the final position - you’ll realise the importance of starting in the right place (and the right orientation) and taking the whole path to the end ... you’ll notice that the design of the pieces only just stops you from doing quite a few of the things you’d really like to – cracking design, nicely executed in all the right choice of materials – the Shapeways material has enough give so that the pieces aren’t brittle and prone to breaking, but have more than enough rigidity to stop you from doing things Richard would rather you didn’t.

You can read Brian’s thoughts over here and  Kevin’s thoughts here – they both seemed to like it too! 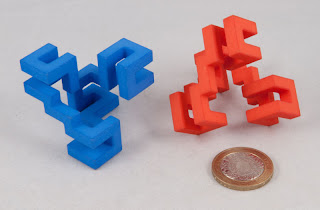