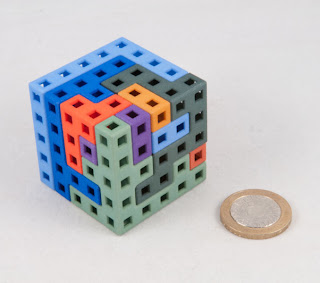 Back in December I acquired a couple more of Richard Gain’s Microcubology puzzles. I’m a lazy sod so I bought them directly from him so that I could get them already coloured – Richard does a great job dying the pieces different colours and only charges a few quid extra for all his hard work. (I keep thinking that one day he’s going to realise that he’s under charging for all his time and he’s going to put the prices up...)
Switch Cube is one of Richard’s own designs and was one of the first puzzles that he made available in a new, slightly larger, cube structure. The individual little cubies making up the pieces are slightly larger than on his earlier puzzles, as are the holes on the faces – and the net result is that he’s managed to produce a larger puzzle without much extra material – which is important because Shapeways, who produce the pieces, charge by the amount of material used in the manufacturing process – so you end up with a larger puzzle for a similar price. Result!
The larger pieces feel just as sturdy as the previous smaller ones, but they’re definitely easier to handle at this size – and indeed there’s one little move on this one that is infinitely less fiddly at this size. [Richard’s taken this even further now with his “Open” structures that have even larger holes on the faces, reducing the price even further.] 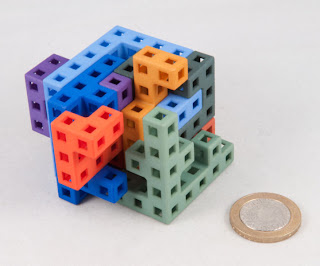 Right, back to the puzzle at hand – Switch Cube is a 5*5*5 interlocking cube, with a twist!
Yip, Burr Tools won’t help you here – it might show you where the pieces could fit, but it won’t show you how to get them there! :-)
Starting out with the cube, it’s fairly straightforward to find the first couple of moves – a quick inspection of the faces will tell you what might move in which direction and soon enough you’re off and running – only then you hit a brick wall and there’s a sneaky little move – not unrelated to the name of the puzzle, that you need to apply before proceeding. Having done that, the cube continues to expand in all directions until the first couple of pieces come adrift – and from there on out, the rest will come apart fairly simply.
Putting it back together, or indeed starting from a pile of pieces, is a much larger challenge. Sure, there are a couple of fairly large pieces that narrow down your options for you, and then you can probably work out how the other bits need to be positioned in the final solution, but working out how to get them in there is more than a little tricky – remember there were 11 moves (by my count) before the first sub-assemblies came apart ... and there’s that sneaky little one in the middle that you’re apt to forget about. 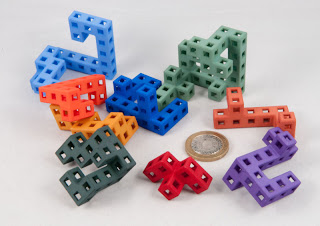 Not sure if I prefer the larger size in general or not, but on this particular puzzle, the extra size means that normal-sized people can do everything they might need to without resorting to a tool of some sort, or a passing small child – and anyway, people tend to frown on that sort of thing, don’t they?
Posted by allard at 17:29