Mathematicians like colouring-in!
There, I’ve said it … now let’s see if any of them read this blog and feel the need to agree or complain…
According to Wikipedia, the less formal version of the Four Colour Theorem states that “given any separation of a plane into contiguous regions, ... no more than four colours are required to colour the regions of the map so that no two adjacent regions have the same colour”. Which is fine if you’re a mathematician – I think it means that you can colour in any flat map (drawn anyhow you please) such that each enclosed area is a different colour to all of its neighbours, using only four colours … and before you hit the comment button, I know that’s not nearly rigorous enough for a mathematician, but I suspect that it works just fine for the other 99.9% of us. 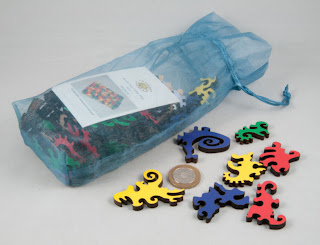 That particular little puzzle had fascinated mathematicians for ages and was eventually proved by Appel and Haken in 1976 using a combination of brute force computing and good old-fashioned analysis on paper … which is an awful lot of background, but as I’m not usually a big fan of jigsaw puzzles, I thought it was important, if only to convince myself that this wasn’t just any jigsaw puzzle – it was really a demonstration of a mathematical theorem – and that makes it OK!


I first stumbled across this rather interesting jigsaw puzzle when I read Brian’s blog about the puzzle over here – the idea of a jigsaw puzzle with no picture on the face of it, where no colours ever join up, and pieces that are just plain whacky, was more than a bit appealing. I duly followed the link across to Artifact Puzzles and was more than a bit gutted to find a wonderful selection of interesting jigsaws (yes – they looked intriguing enough to interest the non-jigsaw-lover!) being offered by a company that would only deliver to the USA … and I’m on the other side of the pond. Dagnabbit!
It seems that this same experience had struck one or two other folks “over here” and a few months later puzzling-buddy Louis asked if anyone was interested in one of these puzzles after he’d convinced one of our American connections (The Juggler!) to play middleman and send them across the ocean – in a mate’s luggage as it turned out … and in the end about six of us were able to get our grubby paws on a copy of this great little puzzle, and then Louis wouldn’t even let me pay for mine on the grounds that I was providing board and lodging for his last trip to MPP5 – thanks Louis!
It comes in a drawstring bag and has a small picture of the assembled puzzle stashed with the pieces – don’t pay too much attention to that and you’ll enjoy the puzzle more – trust me. 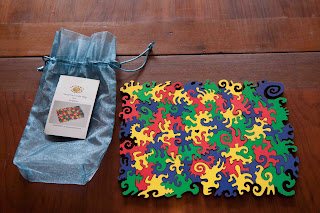 A quick look at any of the pictures will show you that the pieces are different – very different! They’re literally designed to stretch the four colour theorem in lots of ways and as a result you have some unusual joints – including a few places where you’ll find more pieces coming together than you’d originally expected – and yet you’ll never find adjacent pieces with the same colour … and yes that’s useful, especially once you get going.
Being the horribly organised type, I sorted the pieces by colour and then set about trying to find obvious joins. (In fairness, that was the only way to start it since there aren’t any straight edges or pictures to build up!) Once you have a couple of pieces together, you can narrow down the piles that need to be searched for the next pieces to add on by eliminating touching colours – and that’s generally a good strategy, but as I said, every now and then the shapes of the pieces throws you a curve-ball and the single piece you’re looking for turns out to be a combination of two or more pieces.
It took me the best part of an hour and a half (and a cup of coffee) to complete this little puzzle – and it only has 68 pieces! And I really enjoyed it, even though it’s “just a jigsaw puzzle”. In fact I’d probably go so far as to say that if you were only going to admit a single jigsaw puzzle to your collection of mechanical puzzles, this would be a pretty good candidate.
Posted by allard at 17:31