I know – you really don’t deserve this... but I remember a shaggy dog story from my school days that went something along these lines: The really sad thing was that we all heard it after we’d learnt about Pythagoras’ Theorem, and I still had to explain it to some of my mates ... right, where was I? Back to James’ puzzle...

I acquired my copy of this puzzle, James’ IPP30 Exchange Puzzle, from Wil Strijbos when he was visiting for our last MPP. He had a couple of copies in his crates for sale and I thought it looked quite interesting so bagged a copy for myself.

The puzzle is made of acrylic and has six pieces resting in a black tray – with each piece having an obvious space as they’re all different sizes and / or shapes. The accompanying instruction sheet tells you that your quests are to: 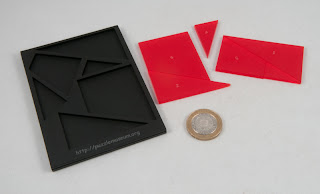 I set about the first task, pretty sure that I knew exactly what was being expected of me ... Pythagoras’ Theorem holds that the sum of the squares of the two shorter sides of a right-angled triangle equal the square of the length of the side opposite the right-angle ... and it’s often represented as showing that the area of the two squares sitting on the shorter sides equals the area of the square that sits on the longest side. Can you see where I’m going with this? (Seriously, if you can’t, you’re reading the wrong blog!)

OK, deciding on a suitable right angled triangle isn’t too tough and the first part (the two smaller ones) wasn’t too tricky – so I had a bash at building the larger one ... and it wouldn’t quite work ... so I fiddled around some more and started experimenting – rather a lot – and every now and then I’d find a smaller rectangle and tick another of my quests off the list, but that larger thingamabob evaded me for quite a while. At one point I even found myself chatting to James on the phone about some arrangements and asked him if there was some sort of a sneaky trick and he set my mind at ease, and really just told me I hadn’t tried hard enough, but in a really nice way! :-)  He also told me that the really hard one was the large rectangle... 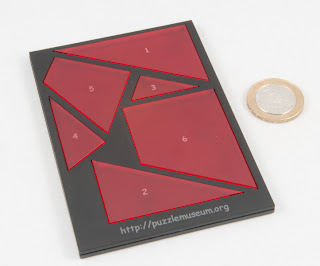 So I kept having a bash at it every now and then, whenever I had a chance, or whenever Gill had hijacked the PC, until eventually I only needed the two largest constructions – but I kept plugging away until eventually I found the second half of my proof, and it was a little sneaky, but I kept my head and thought things through a bit and mulled over whether I could get away with calling a square a rectangle (Technically I believe I can – it’s a special case of a rectangle, I think) and thereby bag both of my final two quests in a single shot – but the challenge got the better of me and I duly came up with a real rectangle a couple of minutes later (and yes, I guess that could be a teeny little clue for anyone still playing with this puzzle).

I quite enjoyed playing with this puzzle – the odd shapes play havoc with my little pea-brain yet the angles all seemed to combine to produce just the right angles required – even when the sides weren’t combining the way that they should! There are stacks of blind alleys to explore and having a couple of different challenges to keep you moving along is always a nice idea.
Posted by allard at 18:54