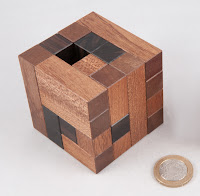 I was really looking forward to getting my grubby paws on Eric Fuller’s version of Jeff Namkung’s Slow Waltz. I’d played around with a couple of Jeff’s designs courtesy of Richard Gain’s Shapeways versions and found the designs were excellent, so the prospect of getting my hands on a beautifully crafted wooden version was more than a bit tempting.

My copy is made of sapele and macassar ebony and lives up to Eric’s normal exacting standards. The two woods give a bit of a clue to the shapes of the pieces – but don’t really make it too easy, after all this is a level 14.8 puzzle, so there’s quite a lot of business to be done before you can release any pieces at all – and it stays interesting pretty much all the way through to the end, with the last two pieces not exactly falling apart either. 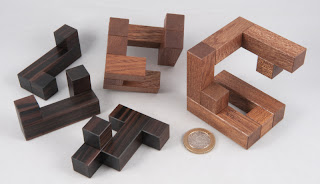 The puzzle starts with an almost complete 4*4*4 cube – there’s a cubie missing from one of the faces. From there you start by opening things up a bit and making some room so that you can get some of the more useful bits moving around – there are a couple of really unusual moves that might evade you for a while, depending on how you grip this puzzle. I discovered a couple of blind alleys during the disassembly (and several more on the assembly!). It’s a fun puzzle to sit and resolve as the movements do seem quite choreographed with things first going one way, and then the other.

It may only have five pieces, but this is a really good design ... for ages I found myself stumped on working out how to introduce one particular piece because the “obvious” way to do it turns out to be less than useless. This is probably the cube that I’ve had to take apart and reassemble the most in order to get to know it – it’s a great little challenge.


[Kevin's written about his thoughts on the Slow Waltz in this post.]