A plan comes together and an unexpected find 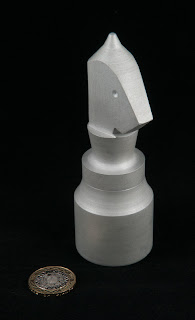 Back in Washington DC in August Marcel Gillen introduced me to a collector who’d recently come into a spare copy of a Gillen Knight and we’d chatted about the possibility of my buying it from him and decided the best route would be to arrange to meet up at the Dutch Cube Day and exchange some cash for a rather collectible puzzle.

Our plan didn’t quite work out in the end as his arrangements unravelled at the last minute but we did get to talk and make an alternative arrangement which subsequently saw some Paypal head in one direction and the postie bringing me a beautifully wrapped puzzle a few days later...

...and as a result I’m now the rather proud owner of an original Marcel Gillen Knight. I’ve had a soft spot for the Knight for quite a while – it stands out among the other chess pieces due to its more sculpted shape and it’s a really handsome piece.

If you’ve played with any of Marcel’s other chess pieces it won’t take you very long to open the Knight – you might spend a while looking for a little tell-tale clue before heading out in a particular direction, where you’ll find something interesting and a little experimentation will yield the solution. 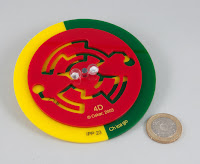 I wrote about Oskar’s Maze Medal some time back and George Bell had commented that he really liked George Miller’s acrylic version, called 4D, that Oskar had used as his Exchange Puzzle at IPP23 in Chicago. At the time I made a mental note to keep an eye out for one and didn’t think much more about it... 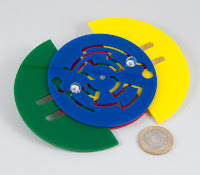 Then at the Dutch Cube Day I was combing through a table full of puzzles and chanced upon a copy of 4D in perfect condition, so I snapped it up... and then went and did the fan-boy thing and asked Oskar if he’d mind autographing it for me – on the inner half so that it won’t get rubbed out when folks play with it.

...and George is right, it is silky smooth and an absolute joy to play with – it’s a bit larger and quite a lot lighter than the Hanayama version. It looks absolutely smashing – George Miller clearly did a superb job making these back in 2003. 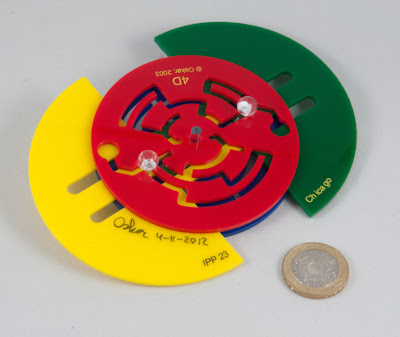