Brian Young’s IPP32 exchange puzzle is a brute of a puzzle! 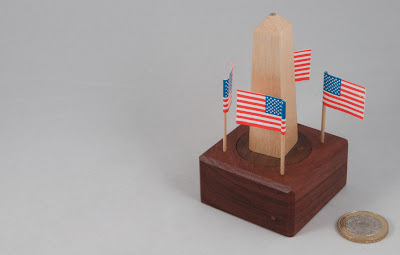 If you’ve solved it (properly!), give yourself a pat on the back – this is a thoroughly devious puzzle.

Brian’s description points out that there’s red, white and blue on the flags, and there’s a white (Queensland Silver Ash) monument on a red (Western Australian Jarrah) base – and all you have to do is find the blue inside, and then relock the puzzle as you found it. Helpfully his description goes on to point out that this is an incredible scale model of the real Washington Monument, right down to the (removable) lightning rod at the top.

Handily the flagpoles all come out leaving four little peepholes into the base ... and as you’d expect, now the monument turns freely and every now and then you can find something shiny whizzing past one of the holes while you’re turning the monument around ... OK ... so we know there are some pins that are keeping the base attached to the monument – and there seem to be quite a few of them. You can hear them rattle if you shake it.

Right, so some sort of pins radiating out from a central point – we’ve seen things like that before, haven’t we? Gotcha!

Spin the sucker and just open it...

Hmmm. That’s weird. That should have worked...

OK, so it’s not quite that simple... probably wouldn’t have been, given that it’s one of Brian Young’s (aka Mr Puzzle) creations.

Right so think about it a bit more... we haven’t inspected that lightning rod yet, so tug on it – feels like something’s sucking it into that hole... Hmmm...

Round about now I started experimenting with some pretty weird ideas – and I play for quite a while before I eventually manage to release the monument and find myself staring at one of the strangest mechanisms I’ve ever seen in a puzzle ... and I stare at it for quite a while trying to work out why it’s just done what I think it’s done – only my brain keeps telling me that it’s just violated a couple of fundamental laws of physics – and my brain doesn’t like it when that happens ... so I think some more, and play some more – and to be honest the confusion merely mounts! Add to that I’m starting to think I’ve gubbed it... So I do the only thing a puzzler in my condition can do – I phone a friend, who’s solved his already and beg for the explanation so that my head will stop spinning at these fundamental violations it keeps coming up against ... and when he tells me, it all slots into place: you’ll be glad to hear that the fundamental laws of physics haven’t been so much violated as temporarily suspended – remember these puzzles were manufactured in Oz!

OK – so having opened it (properly) – closing it is non-trivial, in fact you’re going to find it’s now locked open! Locking it up isn’t simply a case of reversing the process – Oh no – that would be way too simple! You’ll need to come up with a strategy, find the tools to implement it and then close it up again... remember it’s a sequential discovery puzzle!

This is a really incredible little puzzle that incorporates a mechanism I’ve never seen in a puzzle before (I’m still new to this – be gentle!) – it’s a really clever mechanism and I suspect that we’ll see it appearing in some or other guise again in the future – it’s simply too good an idea not to use again!

[Brian’s web-site includes a bit more information about the puzzle than I’ve shared in my write-up, and also points out that you need to solve it properly and not just fluke it – i.e. you need to get all the pins locked in place to have opened it properly ... and then return it to the starting position again... enjoy!]
Posted by allard at 19:09