THAT is a match cube


I wrote about my attempts at making match cubes a little while back and subsequently swapped a couple of emails with Chinny the Australian lathe-meister. It turned out he’d co-presented a workshop at IPP in Prague with Sandor Bozoki – between them they’ve created some pretty darn awesome match cubes, variants of match cubes (match cube in a bottle, anyone?!) and many similarly impossible objects. Chinny sent me a copy of their workshop notes and some pics “for inspiration” – NO WAY am I likely to get anywhere near some of those! 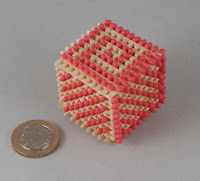 One of the things that I thought might be within reach was a filled match cube – so I took one of recent cubes and set about adding some filling and I must say that I rather like the results ... and they make the resultant cube pretty much bullet-proof as well! 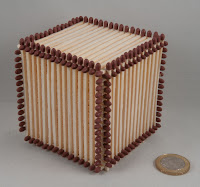 ...on a vaguely related note, I was chatting to Nigel about these things and he mentioned that he’d wanted to have a bash as well, and he’d thought of trying a giant-sized cube – and that sounded like a fun idea... so I went off down to the local Tesco and picked up a few boxes of extra length matches and set about trying to build a cube along my usual lines – only to discover that although they are a little thicker, the extra length tends to make them more susceptible to warps, so a lot more or them need to get turfed out than with the smaller matches ... in the end, my three boxes were reduced to two, and that wasn’t enough to get past adding the roof...

So I bought another three boxes and tried again – and this time we had enough, and things held together ... now THAT is a match cube!

After my blog post on platonic playing card thingies, Derek encouraged me to have a bash at a couple of George Hart’s structures – and as I happened to have a copy of the relevant edition of CFF lying around [#88 in case you're interested], I thought I might as well give it a bash... 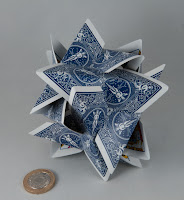 The smaller of the two consists of 12 cards and has reasonably deep cuts and a corner-to-corner fold on each card. Once you’ve put the necessary cuts in them and folded them to about 60 degrees, you start by assembling them in interlocking sets of three. There’s a knack to getting the third card of each set properly introduced and they need to all interlock with one another, at the same time.

My technique certainly wasn’t pretty, but by the time I was almost done it, was passable. The 12-card structure produces quite a spiky, dense ball when you’re all done. 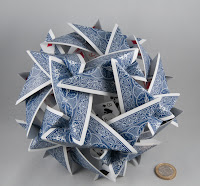 After I’d reported back to Derek that I’d done the 12-card version, he helpfully goaded me onto trying the 30-card version ... so I cut out a set of cards (shallower cuts on this one) and bent them appropriately and then had a bash at joining my first set of three ... I had a picture of the completed structure for reference, and I knew that in theory they had to go together more or less the same as the 12-card version, but I could not get them to lock together properly. I made several attempts before putting them to one side and retiring hurt ... until a couple of nights later when some further fiddling managed to get one set properly linked. Flushed with success, I put them to one side and focused on something else ... hey, I happen to have a really short attention span! 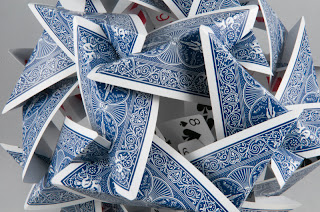 I kept coming back again and again, generally not managing to add much to the structure at all, but every now and then managing to add a few more cards. Yesterday I decided it was now or never and set about finishing it and finally managed to lock the final card in place ... producing a pretty decent structure of thoroughly interlocked cards – but I can honestly say that I still haven’t mastered the technique for interlinking these ones properly ... looks good though!