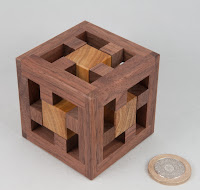 The last of my writes-up on Eric Fuller’s latest offering is an unusual pair of caged burrs. They were designed by different people at about the same time and they share a common cage – so Eric has produced them as a set with a single cage and two pairs of burr pieces.

The common bit, the cage, is made of walnut and uses some nifty shouldered joints to make sure that enthusiastic puzzlers aren’t left holding a pile of pieces when trying to extract those three little burr pieces.

It’s a simple 6*6*6 cage with an outer ring on each side and a 2*2 hole in the centre. Then there are four interfering cubes in the middle layer of each face that are either offset clockwise or anti-clockwise around the face in such a way that opposite sides coincide ... a few designers (not just these two!) have employed frames this shape in their devious pursuits. 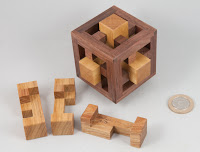 Ghidorah Box was designed by Yavuz Demirhan in 2012 and has three dissimilar pieces that Eric has made in canarywood. Eric billed the Ghidorah Box as the warm-up of the two puzzles inasmuch as it has “only” a level 22 solution – although I reckon it’s still a pretty decent challenge. There are only so many ways that you can put the three pieces together in an interlocking form, and then it’s just a case of working out how to get them in that target shape inside the frame from hell! I tend to think of working in terms of degrees of freedom – get as much freedom as you can with the pieces in situ so that you can introduce the last piece and then work them together into the target shape ... sometimes it works!

Vectes designed by Alfons Eyckmans uses burr pieces that are two units longer than the frame, so they end up sticking out either end, and generally getting even more in the way during solving. These pieces have been cut from some lovely yellowheart and also fit perfectly in the frame. A couple of the moves in this solution involve some pretty precise positioning of the pieces and it’s pretty clear that Eric has got the fit spot on – get them properly aligned and they move perfectly, have one of the burrs a little off line and it will refuse to slide home... the bevelling on the ends does help with that a little. 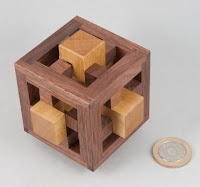 Vectes is the definitely daddy here at level 37 moves to free the first piece and that translates into more manoeuvring to get some of the bits in a useful space to move the other bits around... lovely puzzles that work really neatly as a pair.

WELL DONE Eric for spotting the common thread and for producing a pair that go together beautifully.

Afterthought: as I was writing up this post my mind went wandering a little and I wondered if it would be possible to mix and match the pieces a bit ... and indeed it is! Franken-puzzle anyone?