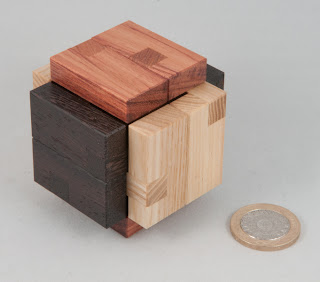 Designed by my mate Derek Bosch, this was one of Eric Fuller’s latest round of offerings.

I should stop right there – and I probably would if it wouldn’t make the blog post look rather picture heavy and text light… so I’ll ramble a bit.

Assembled, it looks pretty benign – almost like a 6-piece board burr with fairly fat boards. However (there’s always a however, isn’t there?) as soon as you start moving any of the bits, it is very clear that this one is rather devilish: each of the ends of the pieces are perpendicular to one another … There was probably a clue to that in the starting shape – if it was a board burr, then the boards would have had to have been twisted through ninety degrees, on the inside.

It takes a little while to get used to the movements and the fact that a horizontal plate on one side is connected to vertical plate on the other … I suppose at least they connect straight through, unlike some designs!

Along the path to disassembly you’ll find some pieces come tantalisingly close to falling out, yet they remain thoroughly trapped until the 26th (!) move finally releases the first piece … oh  and don’t be surprised if you find yourself apparently going backwards and forwards a few times – you might still be on the right trail! 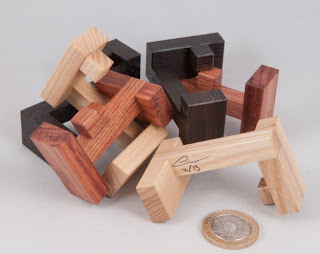 I am not ashamed to say that reassembly without the use of my favourite puzzling software is (well!) beyond my puzzling powers … even Eric’s kind use of three different woods (Ash / Wenge / Bubinga) for the pairs of pieces is not enough of a hint to enable me to assemble it on my own.

The pieces look pretty simple, if a little unusual, and yet they produce a wonderfully challenging puzzle. Eric’s done his usual terrific job of creating pieces that not only look great, but fit together marvellously and will stand the test of time (the sticks join the plates in a straight through joint for extra strength).

A couple of us told Derek that his design was evil on the Cubic Dissection Facebook group - he took that as a compliment … and he should – it’s a great design, beautifully produced by Eric! Nice one guys!
Posted by allard at 21:11