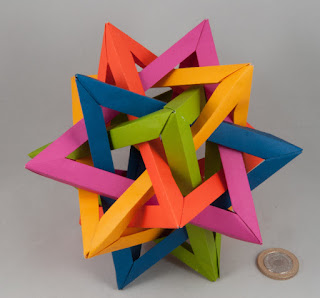 OK, so I’ve been wanting to build myself an origami model of five intersecting tetrahedra (aka the very poor man’s Merkaba) for ages now... and this weekend I finally plucked up the courage and happened to have a few hours spare as I’d met up with some puzzling buddies in the morning and Gill was out all day .. so the afternoon was clear.

I tee’d up a YouTube instructional video by Adkit (Swedish chap with a terrific sense of self-deprecating humour!) and started by cutting up ten sheets of paper into thirty 3:1 strips ... watched a bit of the video and then started folding the thirty strips into angled beams with pockets and hooks at each end ... it took a while at first, but by the time you hit the last 10 or so you’ll have it pretty much sussed – I found it easiest to pretty much run it as a mini production line doing one step at a time across all of the pieces... YMMV.

When the pieces are all made up, the fun really begins when you build the first tetrahedron. I had difficulty getting the joints to lock together and as a result I ended up committing origami treason and using adhesive to keep the ends together.  Building one tetrahedron is a relative doddle ... building the second one interlocked with the first one isn’t too much of a stretch ... but when it comes to adding the third, you need to keep your wits about you! Inserting the fourth and then the final one requires some pretty careful work to make sure you’re putting them all in the right places.

I thought I’d done OK until I inspected my handiwork right at the end to find a couple of the legs bending at some pretty odd angles where I’d got them on the wrong side of another leg... happily, adjusting them afterwards isn’t too difficult because you can disconnect one end of an offending leg, flatten it and thread it back out and then through the gap you should have put it in in the first place and then put the bend back in it again and reconnect ... (Yes, several of them, since you’re asking!)

The end result looks pretty cool but doesn’t stand up to much scrutiny – not least because of my application of adhesive (Oh the shame of it!) and the points not being especially neat – but I reckon it’s not bad for a first attempt... 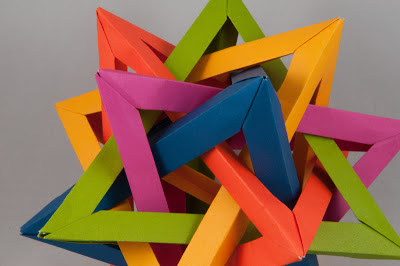 After I’d finished that and when I was putting this post together I stumbled across a really explicit set of instructions over here and realised that I’d totally missed part of the functioning of the hook in getting the pieces to lock together – little wonder I was getting so frustrated and had to use spots of double-sided adhesive to get it all to hang together!

Maybe there will be a next time after all...
Posted by allard at 20:59

Email ThisBlogThis!Share to TwitterShare to FacebookShare to Pinterest
Labels: origami