Following the usual breakfast I headed up to the room to grab an empty rucksack and a full wallet before heading down to the puzzle party to try and reverse that situation.

There was a gaggle of folks milling around outside the room waiting for the 9 o'clock starter's gun (no, not quite, but you get the picture!). At the stroke of 9am everyone piles in and almost immediately there's an excited mob forming at the back left-hand corner of the room.

Curiosity wins and I head in that direction to find Teddy and Hirano-san rapidly selling some rather unusual Karakuri boxes - they're all gone in about ten minutes and things calmed down a bit from then on.  I got a burr :-).

I did my usual quick wander around the hall to identify anything special that I absolutely had to get and then proceeded to wander at a more genteel pace, fiddle with the odd puzzle, chat, and occasionally purchase something.

Torito had a table groaning with stock on it including all of the latest cast puzzles so I loaded up on some spares to take back to the Midlands boys as it's going to be a while before 2Gs and Cast Cylinder wend their way over here.

I found a set of three nested burrs by Hiroshi Kaneko where the smallest one is about 10mm long - he'd exchanged a set of two nested burrs the day before but I couldn't resist picking up a copy with three of them neatly nested inside one another...

During the lunch break a bunch of us set up camp with our lunch boxes, outside the puzzle party room and tucked in - and while we were munching away there was a vaguely familiar rumbling and the chandeliers began swaying - the Californians immediately identified it as being reasonably far away and of moderate intensity, and then promptly all hauled out their smart phones and logged onto the USGS website for confirmation... and a short while later it had been logged as a magnitude 5.2 around 100 km away - those guys know their tremblers.

After lunch I completed a couple more laps around the room (to be sure, to be sure!) with an increasing amount of chatting and a slightly decreasing amount of purchasing. Things wound down to a natural end and most of us simply wandered next door to the Design Competition room to finalise our voting choices.

To celebrate the 30th anniversary of Hanayama's Cast Puzzles, there were three talks on various aspects of cast puzzle design, production and sales. The first talk had to be delivered by a stand-in as James Dalgety was sadly unable to join us in Narita. James had put together a lovely witty presentation that got a great reaction to a number of the jokes he'd woven in. It was really interesting seeing the history of the puzzles we all recognise in the current Hanayama range after James introduced the old puzzles to Nob Yoshigahara who in turn improved some of the designs before they were produced by Hanayama. 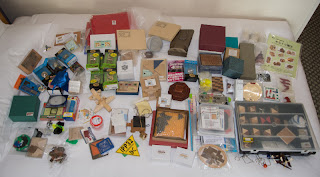 Next up Oskar van Deventer gave a talk on the development of the Cast H&H puzzle and his puzzle designing history and development - including a great link from the Cooksey Maze that started him off as a serious puzzle designer decades ago, to finally finding and meeting Richard Cooksey, its designer, earlier this year. The final speaker was Teddy Sakamoto who talked about the manufacturing and marketing of Cast Puzzles around the world. It was interesting to see how the sales of cast puzzles differ around the world and quite amusing to see the sales figures analysed various ways, like puzzles per capita and puzzles per square kilometre - so we now know that in Japan, on average, you're never more than SQRT(2) km from a cast puzzle!

In the spare hour or so between the lectures and dinner I managed to get almost all of my packing done and then headed down for dinner where we duly set up a largely Renegades table and we were joined by Jinhoo Ahn and Edi Nagata and his family.

It was Jinhoo's first IPP so I gave him a copy of my exchange puzzle (in honour of the Wiltshire / Fisher tradition!) and was very chuffed to receive a copy of his latest cardboard entanglement puzzle Double O Grid.

During the speeches the host committee was thanked profusely and Iwahiro was presented with a unique Wayne Daniels puzzle creation as thanks for being a tremendous host for IPP33.  Nick Baxter ran through the awards resulting in another Renegades win when Derek Bosch won for his wonderfully confusing Helical Burr.

After the awards and the official declaration of the end of IPP33 everyone seemed loathe to leave and admit that another IPP was actually all over and I suspect that I wasn't the only person who said goodbye to some folks several times as we all failed to actually leave a number of times.

There was a classic situation when George Bell pulled out a copy of Tricky Dicky he'd bought earlier on in the day from Brian Young. He fiddled with it for a while and got nowhere fast, so when Nick wandered over and said "Oh, that's just a ball and chain" it was presented to him to solve and a little while later it was duly returned to George, still unsolved, with a bit of the sheep about him. 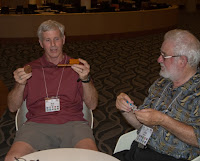 Noticing that Rick Eason had joined our merry little band, it was handed to him and when he made a show of placing it behind his back I leapt up sensing a great photo opportunity - only for him in turn to rather sheepishly admit partial defeat and bring it out in front of him - and then proceeded to tie it up in a  number of rather impressive knots under Nick's watchful gaze ... he did free the ring in the end and it was duly passed around the group and Stan and Chinny took turns putting it on and taking it off again...be warned, there's a clue in the name - that one's hard! Even if you invented it!

I called it a day at around midnight and finished off packing the bags that would stay at the hotel for the next few days while I headed off west... because in spite of the official end of IPP33, the story doesn't quite end here...