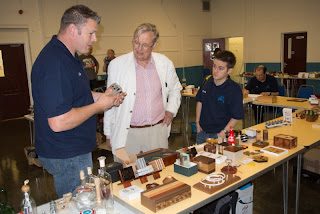 The weekend starts for me on Friday evening when James Dalgety arrives for dinner armed with chocolates, wine and an orchid. We decide not to eat the orchid and instead go with Gill’s idea of Chicken Teriyaki – and that turns out to be a good choice, no that the orchid wouldn’t have been as delicious, I’m sure. I introduce James to my little collection and he makes some complimentary comments before suggesting that it’s clearly large enough and I should probably stop buying puzzles now. Realising this is clearly an early sign of withdrawal symptoms, I begin shoving some puzzles in his hand once I’ve established that there are one or two that he hasn’t yet played with … normal service resumes.

At about 9:30pm we adjourn to the airport to collect Louis and he walks into the arrivals hall about a minute after we get there – a personal record in timing it just right prompted by BHX’s exorbitant short term parking pricing past the first ten minutes. Back at Barnt Green we dose up on coffee and tea and end up in the cave puzzling until some of us give up at half past midnight, leaving Louis to conquer a few more before he called it a night.

Next morning we all have a leisurely breakfast before heading across to Nigel’s place in Warwick for the first few hours of MPP as our usual venue isn’t available until midday. Nigel’s in full-on host-mode offering everyone coffee and croissants and making sure that everyone’s having a superb time. I manage to get rid of pretty much all of the puzzles I’ve brought back from Japan for various people and folks seem chuffed with their pressies … my work here is done – now I too can become a puzzler for the rest of the day!

James has brought along an impressive collection of cylindrical hidden maze puzzles (including some he didn’t realise he had!) – all of them pre-dating Revomazes – the original impetus behind us starting up the MPP. He's also brought along a partially assembled Coffin-original called Iso-Prism (aka #101-A)  that he challenges us to reassemble properly. Despite a convincing sales pitch, he doesn't get any takers on the Iso-Prism - at least not for the first few hours, then some idiot has a go at it ... but more on that later.

We spend a couple of hours at Nigel's until he rounds us up and shoos us out so that we can walk (or drive!) the hundred-odd metres down the road to our usual hangout, The Gap. We all manage to get there without mishap, and soon enough have the hall strewn with chairs, and tables laden with puzzles - all is good in the land.

There follows many hours of happy puzzling... :-) 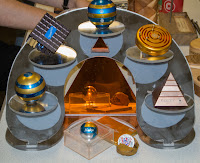 It was great to meet Stephen Miller that we'd "met" via FaceBook - he'd brought along a serious collection of Sonic Games/Sonic Warp/whatever-the-company-is-called-at-the-moment's puzzles on a very handsome self-made stand. Turns out Stephen is an absolute whizz at whipping things up and has had a hand in designing (OK, he designed!) some rather current, desirable puzzles! He also enjoys blowing up watermelons in his backyard - so what's not to like about the guy?! One thing I particularly enjoyed hearing about was some real-world adventure / puzzle trails he's run in the past, and hopefully will run again in the future...

Adin had brought along his Lego ternary puzzle and it received a lot of interest - and generated even more interest when it pitched up on FaceBook and Jez (come back, we miss you!) duly mocked up a set of instructions for building one, and a parts list for anyone wanting to build their own - nice one Adin!

I'd taken along every single puzzle I brought back from IPP33 with me and there was a steady trickle of folks taking one or two across to the puzzling tables to have a bash at them over the course of the afternoon...good to see them getting some more exercise! (The puzzlers, that is...)

One of the classic memories of the afternoon was seeing four grown men playing on the floor - with one of George Bell's exploding balls... they'd had a go at Chinny's big ball - Ze RD - and disassembled and reassembled that one and then wanted to get George's ball apart, but casual spinning on the floor just wasn't enough... so they formed a circle and took turns spinning the heck out of it!

When they'd tried that for about ten minutes they decided that they couldn't get enough spin on exactly the right axis and decided they needed to resort to rolling it on the axis at high speed - from one end of the hall to the other... Oli played goalie at the one end  and Steve and Chris resorted to using a mattress to stop it at the other end... after many enthusiastic passes the ball finally let go and they were chuffed - especially to find the crystal dice hidden inside - everything survived the ordeal and it was soon reassembled and returned to the pile ... with a couple of grins that you might expect from a group of kids who've just had a great game on the playground.

Satomi and Scott joined us along with their son for the afternoon, and as usual she had a wonderful selection of interesting goodies, including a couple of rather neat looking burrs that I didn't bother even trying to resist.

Several folks had a bash at Brian Young's Kumiki Airlines and pretty much all of them succeeded - WAY QUICKER than I had! Frank's collection of impossible bottles drew many admiring remarks and might just have spurred some folks on to trying their own hand at making one or two of them, with a little encouragement from Frank...

At some point during the afternoon, I decided that someone needed to have a bash at James' Iso-Prism, so I hauled it out. It was pretty easy taking it apart (after James had confirmed that he would happily take it home in bits) and James talked me through the high level strategy of reassembling it - I listened carefully and decided that I was seriously out of my depth here, but I'd better have a bash having taken the darn thing apart. 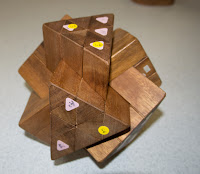 I separated them into sets of pieces and then began trying to fit them all together - hitting dead ends several times and having to backtrack - and every now and then losing track of which pieces had come from which set and having to start all over again. After a while the pieces started to make sense and Ali leant over and made a really helpful suggestion - and from there on it was just a case of getting the assembly order right - it took a few more goes at trying different orders until I spotted a bit of symmetry that I'd been ignoring in the assembly process and then things literally fell into place - and it felt absolutely brilliant to put the final three key pieces into their allotted spots. [Oh yeah, and in case you're wondering, those stickers might have made sense to someone once, but I couldn't work out their meaning before, during or after solving it.]

One of the fun things we try and do every now and then is gather a bunch of puzzles together from our group for a family portrait - this time it was KCubes from Kim Klobucher - we managed eight ... not bad given how difficult they are to get hold of...

Louis and I headed back to my place sometime after eight and sat down to some more puzzling after having a couple of pizzas ... this time I didn't come close to staying awake until after midnight so I left Louis in the cave puzzling away - and the next morning there was a neat row of solved puzzles waiting as proof ... including a solved Ball in Cylinder II from Jerry Loo - which I still haven't been able to solve! [I haven't forgotten about it Jerry - promise - it's just still got me beaten - cue another blogger to tell me how thick I am!]

...a couple more hour's puzzling on Sunday morning before I dropped Louis at the airport for his trek back to Eindhoven - a great end to another weekend's puzzling. 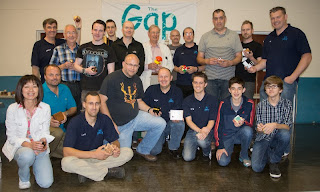