10 K’s
The first time I picked up Lixy Yamada’s 10 K’s exchange puzzle and actually tried getting anywhere I was sitting in front of the telly. I had a go at a couple of the constructions and ended up with a few that looked vaguely like K’s – if you squinted your eyes and used your imagination.

A short while after that I read George’s description of it and realised that I’d missed something important - all 10 constructions give you exactly the same K-shape! Having totally missed the point – or come up with an ingeniously creative solution – I decided I need to have another bash at 10 K’s – so when I recently went around to Nigel’s one evening to play with puzzles, I took my copy along. 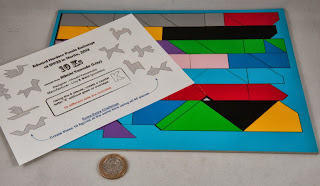 10 K’s has 10 different (very different!) dissections of the letter “K”, each in a different colour and all the pieces are neatly packed into a single sheet when not in play, although Lixy has also thoughtfully provided a set of individual Ziploc bags for each set of pieces.

Back at Nigel’s I picked a benign-looking set of pieces and set about trying to make a K – and after a short while I realised that I’d started with the wrong one and tried to find a simpler one … and indeed after a brief search I’d managed to make a reasonably convincing “K” from the pieces … and then applying George’s rather handy strategy of building the next one on top of the first one, worked out where some of the pieces had to go, and where the others were likely to go…

The 10 different dissections really are different!

I thought I’d seen a classic “K” dissection before, but I didn’t recognise it among the set in this puzzle. A number of the dissections have a couple of pieces that look similar, possibly even identical, and while it might seem to make sense to use them in similar positions symmetrically, that often isn’t very useful. Don’t you love it when logic proves useless in a puzzle?! :-)

IPP Dissection
Noji Tsugumitsu is pulling together some research into letter dissection puzzles and was dishing out a set of three of three dissections at IPP33 – and he kindly gave me a set of them of while we were visiting Kanazawa on our post-IPP trip. 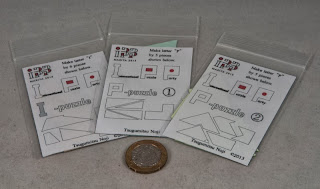 There are two different P-dissections which are reasonably confusing, but the I-dissection is positively devious, taking me several times the total time expended on the two P’s.

Noji is quite keen to hear from anyone who has any interesting or unusual letter dissections, so please let me know if you have any and I’ll put you in touch with him …  he had a pretty large collection in a flipfile that he was showing around at IPP33 and he intends to publish them in some form in the future. 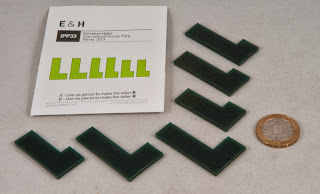 Emrehan Halici’s exchange puzzle  consists of a set of L-shaped pieces of different widths and lengths which you are asked to construct an “E” and an “H” from. The L’s are laser-cut acrylic pieces and come in 3 identical pairs … which might strike you as helpful, and indeed it may be helpful, however when you start trying to build the two target letters, you’ll probably find that you don’t really want a pair of everything – I kept finding a perfectly acceptable looking answer (from my perspective at any rate) only to have a piece left over…

The two constructions required are really different, so solving one of them gives you absolutely no clues on solving the other … a pair of neat little challenges that use the same set of pieces – clever!