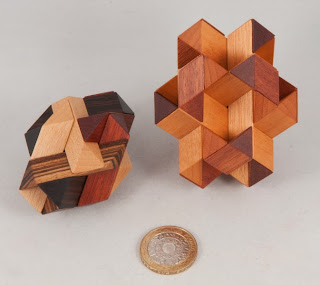 Jane Kostick entered another of her wonderful magnetic assemblies in this year’s Nob Yoshigahara Puzzle Design Competition. I’d been trading emails with her in the weeks running up to IPP33 and she’d said that this year’s entry was definitely a bit harder as a puzzle than her previous entries, and having seen some pics, I knew that they looked smashing, so in the course of those emails I asked if there might be a set for sale ... and duly secured one of them.

Knowing that I’d bought one of the sets, I just had a bit of a play with them in the competition room at IPP33 but didn’t really get very far at all… not because I wasn’t able to, you understand, but because I wasn’t really trying! [Well that’s my story and I’m sticking to it!]

In fairness, I had a pretty good bash at it and got nowhere!

After the end of the competition I picked up the spare copy from Nick Baxter and a couple of days later I got to spend some time playing with it.

There’s a solid cuboctahedron (picture a uniform polyhedron made up of square faces each of which has an equilateral triangle hanging off each side – 6 square faces and 8 triangular faces in total) and two sets of sticks. The object of the two challenges is to use a set of sticks to properly cover the cuboctahedron. 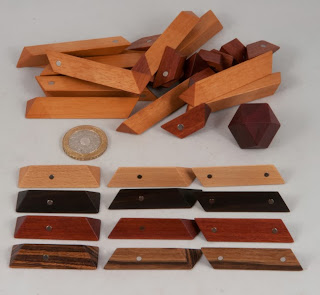 The simpler of the two challenges uses 12 sticks that are all roughly the same length. This set consists of 4 different coloured sets of sticks and there’s a fairly clear difference in the angles on some of the pieces … fiddling around with how the sticks snap together around the block you can work out more or less how they’re going to go together and once you have the beginnings of a little nest for the block, the rest goes together reasonably simply … and then when you’ve got a nice solid structure you might want to pay some attention to the colour symmetry and get each of the three and four-fold joints so that there aren’t any duplicate colours – and then notice the overall colour symmetry that always gives you a pair of like colours parallel to one another on each side – neat! (...unlike the construction in these pics!)

The second of the two challenges is supposed to be a little harder (and IT IS!) – it uses 24 sticks in two lengths, the shorter ones in Bloodwood and the longer ones in Tigerwood. (The eagle-eyed might spot that it’s not quite the same construction as the main set used in the Design Competition.)

Fired up with my victory over the first challenge, I launch myself into the second and start building random structures around the block hoping that I’ll stumble across something that looks promising that I can develop into something useful… 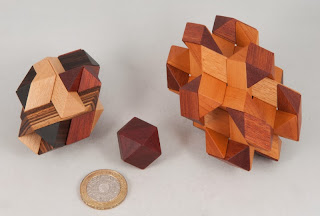 I seem to spend quite a while playing before I realise that the structures I’m coming up with aren’t behaving as predictably as I think they should, and the one time that I think I’m getting close, I find that the last couple of sticks don’t sit flush – and I know that there is no way that Jane would have allowed a piece out into the wild that didn’t fit perfectly – I know that I’m doing something wrong.

So I go right back to basics and lay out the pieces in groups of identical pieces, except that I find that they aren’t quite, or rather, there are more types of pieces than I’d realised … and the number of types leads me to think of a particular sort of sub-structure … and when I find the right one, it hangs together properly – not like the sub-assemblies I’d been trying earlier that hadn’t wanted to hold their shape at all… from there it was a short hop, skip and a mental jump to work out how to wrap those sub-assemblies around the block and in-between one another to form a very elegant, and perfectly fitting assembly that totally covers the block.

As usual the eventual assemblies are beautiful objects. The pieces are perfectly crafted to snap together solidly, and they provide a rather nice puzzling challenge... Thanks Jane!
Posted by allard at 11:45