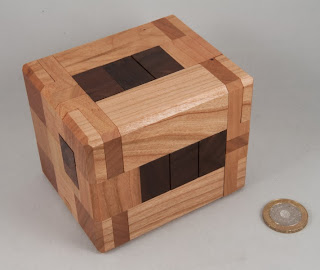 I’ve been wanting to get my hands on a Binary and a Ternary Burr for absolute ages, so when Eric Fuller hinted that he might be making some and teasingly asked if anyone might be interested, I sat up and paid close attention.

The Binary Burr was designed by Burr-Master Bill Cutler back in 2003 when he entered it in the IPP Design Competition and promptly won first prize for his trouble… this puzzle has pedigree! Bill has taken the Classic Chinese Rings concept and burr-ified it – giving you a slider that interferes with a two sets of ring-pieces set at ninety degrees to one another. The ring-pieces move in and out (a bit like pistons in an engine) according to certain fairly simple rules and a whole heap of recursion. Those bits are all kept in place by a clever interlocking 14-piece cage that only comes apart when the slider and the ring-pieces are removed. Removing the slider (the first piece to come out) takes 85 moves … <GRIN>

Jerry McFarland has produced a number of copies over the years but I hadn’t managed to snag myself one of them, so Eric’s run was great news. 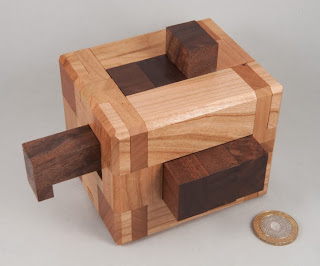 Eric’s version uses cherry for the cage and walnut for the slider bar and ring-pieces.  He’d had a bit of trouble keeping the humidity in his workshop stable while he was producing the Binary Burrs so they ended up a bit looser than he would have preferred. (The cumulative tolerance was off by a miserable 0.035”!)  In the end he offered them for sale at a silly cheap price and they disappeared even quicker than his usual batches of puzzles would.

It absolutely looks the business, even if the fit isn’t up to Eric’s usual impeccable standards … you do need to make sure that the pieces are all properly aligned before you can make the next move and in some of the positions you need to make sure that the wrong pieces don’t accidentally drop down when you don’t want them to… but I now have a super-looking copy of one of the classic modern puzzle designs in my collection – and I won’t be letting this one go any time soon. 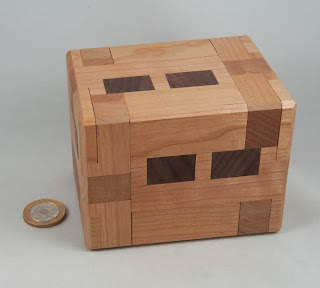 Ternary Burr was the result of Goh Pit Khiam’s fantastically creative mind wondering whether it might be possible to adapt Cutler’s Binary Burr in the same sort of way that Markus Goetz had adapted Spin-Out from the binary puzzle to his ternary version in the Crazy Elephant Dance.

Ternary Burr uses the same basic design as the Binary Burr and then modifies the ring-pieces so that they have three positions instead of just two, with each ring-piece’s permissible movements being determined by the positions of the pieces before it. The Ternary Burr was originally produced as a Limited Edition of 30 by Brian Young in 2009. So while getting hold of a copy of Binary Burr was hard, finding a Ternary Burr was pretty much impossible until Eric produced his latest batch … and he got the tolerances absolutely perfect on these! 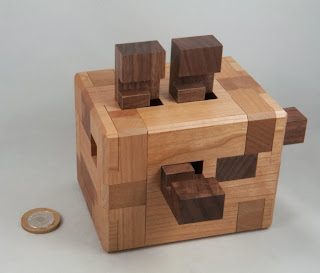 Once again Eric’s used cherry and walnut, so the Ternary Burr looks stunning next to its baby brother Binary Burr. There is absolutely no unwanted slop in this puzzle – everything lines up beautifully all the time and the mechanism is an absolute joy to fiddle with. Even though the Ternary Burr only has four ring-pieces, it still takes 75 moves to remove the first piece, with the ring-pieces and the cage then coming apart in pretty much the same fashion as the Binary Burr.

This one became one of my favourite burrs almost immediately and I’d struggle to imagine something unseating it.

Since Eric’s round of Binary Burrs made their appearance my friend Steve has been playing around with a 3D printed version of this puzzle, and then went on to tweak things a little by adding some extra ring-pieces and has now produced an eight and a twelve ring version! (Jolly thousands of moves!)

…and if you’re interested in these sort of n-ary puzzles, you really should bookmark Goetz Schwandtner’s compendium pages over here and his n-ary puzzle page over here.