I picked up a copy of Goh Pit Khiam's Retrofit Puzzle at the recent Dutch Cube Day. I think it was one of my fiver-for-anything-on-the-table purchases from Jan – but I could be wrong on that – it’s definitely worth more than a fiver! 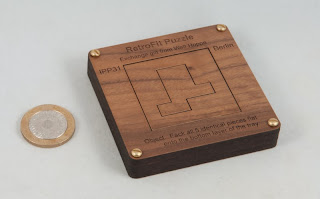 Retrofit was Walt Hoppe’s exchange puzzle from IPP31 in Berlin. It’s a neat little tray-packing puzzle where your aim is to fit five identical pieces (yes, I checked!) into the tray … the one little snag is that the tray has an overhang inside its lip which restricts the access rather a bit. It’s a neatly designed puzzle that puts the fifth piece inside a cut-out in the tray’s lid- which means that simply wrapping an elastic band around the puzzle keeps everything together nicely.

I’d played around, rather unsuccessfully with Retrofit for a little while, so when I headed north for a conference in Edinburgh recently, I took it along to pass the time in airports or on planes… and as luck would have it the first time I got a chance to pull out a puzzle was on the flight back down to Brum.

With a little fiddling I’d been able to work out that the lip generally accounted for a single voxel so I could effectively experiment out of the box and try and work out a configuration, and then engineer a means of assembling that inside the box… 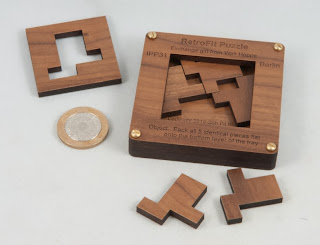 I came up with a few potential candidates, but then failed totally at trying to work out how I might get them physically inside the tray… those sticky-outy-bits really manage to get in the way a lot!

About half-way through the flight I’d abandoned my “logical” approach and began experimenting with interesting shapes and symmetries (interesting concept with five identical pieces!) and them stumbled across something rather interesting that lead me to the solution, which is really surprising and very elegant.

Cute travel puzzle that provides a nice little challenge, without leaving you tearing your hair out for days on end.

I picked up a copy of Seven Stellar Fragments from Mine’s little stall outside Izumiya on our IPP day-trip to Hakone.

Seven spikey bits of acrylic in varying shapes are provided and your goal is to build a pentagram – or five-pointed star. Immediately you spot the problem here: two pointy-bits too many… and so begins the puzzling…

I gave this one to a few folks to play with during the course of IPP and I think that Sherpa-Supreme Marc P was the first, and possibly the only, person who solved it there (doubtless I’ll be reminded of hordes of others in due course!). 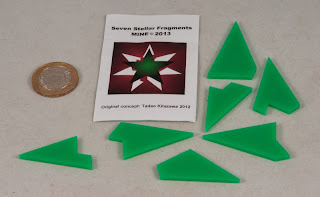 Seeing his solution on the fold down tray table on the express into Tokyo served to confirm that the target shape was a standard, regular pentagram … on its own, not a huge amount of help!

Back at home I’d pick it up and have a bash at it every now and then, and normally end up trying the same things over and over willing them to work better, before putting it away and switching my attention elsewhere before having to admit I was thick!

I did manage to stumble across the solution eventually, and promptly did a Louis (I took out my phone and photographed the solution!) so that I wouldn’t have to toil quite as much next time…

The solution is pretty wicked – the internal cuts have been made deliberately very confusing, and Mine has succeeded on that front very well, making it a pretty darn decent challenge.
Posted by allard at 17:47