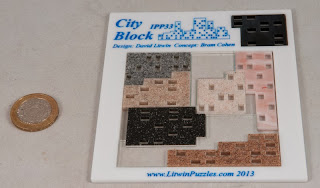 City Block was Dave Litwin’s IPP33 Exchange Puzzle – it’s a collaboration with Bram Cohen (who also happened to design Cast Marble, my all-time favourite Hanayama puzzle) and there’s a fantastic interview with Dave and Bram on Saul Symonds blog over here. Well worth a read!

The puzzle presents you with a set of building-shaped pieces, complete with cut-out windows, which you are first challenged to arrange in the silhouette of the cityscape printed on the top of the tray (described by Dave as a warm-up challenge – which feels about right) – the next challenge is to fit all of the pieces inside the tray … including the one that has its own space outside the tray to start with.

Coffin’s tray-packing puzzles are usually pretty darn mean – even when you get a perfectly square tray (because you can basically ignore the positioning of the eventual solution) they’re hard. In my mind they get harder when he changes the shape of the tray and tosses in some funky angles (Lean 2 anyone?) – but when he gives you an oval tray with no straight edges at all, in my mind he’s just gone and given you an almost infinite number of orientations to check. Even with Stewart’s helpful little words of advice on the back of the tray, STC #260 X-1 is still a very serious challenge.

I’d spent ages working on this one on and off since IPP and if it hadn’t been for Louis solving it on one of his visits, I probably still wouldn’t have it neatly packed in the tray.

Occam’s Razor was Vladimir Krasnoukhov’s exchange puzzle. A neat little acrylic tray-packing puzzle with one large piece (a razor?) starting out in its own little compartment in the tray – your aim is to pack all of the pieces into the main section of the tray… 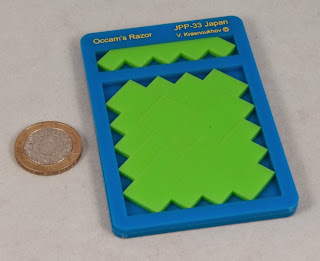 This one’s interesting because the main section of the tray starts out with all the pieces on the diagonal … knowing these sort of puzzles, and having seen one or two of Vladimir’s others designs, I merrily set off down the path I thought was likely to be most fruitful … and spent quite a long time exploring it without much luck at all … eventually I went off on another tack and this time managed to achieve something interesting and found that there was just enough space left to slot the razor-piece into the tray … fun little puzzle where the name makes sense on all sorts of levels.
__________________ 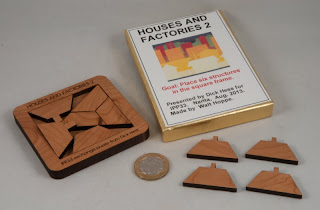 You’re given a square frame and three types of pieces: houses (roof with no chimney), small factories (roof with small chimney) and large factories (work it out yourself!). The instructions give you three challenges to fit respective sets of six pieces inside the frame. 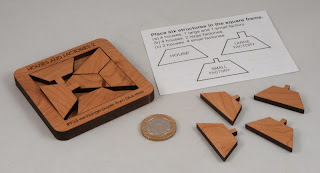 Those challenges are excellent – I found myself spending hours spread over several weeks fiddling around with them from time to time – and getting a huge sense of satisfaction whenever I managed to get a set of pieces to fit in the frame. The solutions are all pretty different, so having solved any one of them doesn’t really provide much help on solving the others…
Posted by allard at 07:59