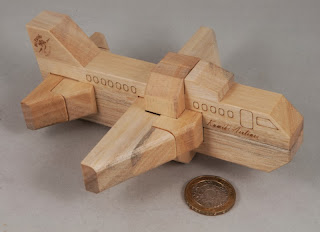 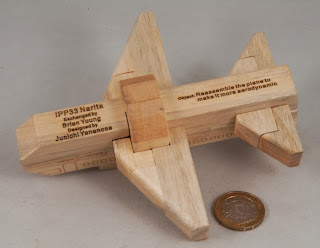 Thankfully, I hadn’t realised that it was a level 13 burr so I continued to think I might actually be able to solve this puzzle. (I’m rubbish at complicated burrs! – If it weren’t for BurrTools, most of my collection would look like a selection of bags of notched sticks!) I ended up spending a couple of hours, spread over a few weeks, getting annoyingly close to solving this puzzle – I’d invariably end up with one half of the tail plane in just the wrong place with no way of manipulating the rest of the pieces in order to manoeuvre that last bit into the right place… it felt like ages playing around with variations on that theme but somehow I always ended up with that one piece stubbornly refusing to get into place.
After a bit more head-scratching I went looking for an alternative starting point and managed to find a slight variation on my tried and tested (and wrong!) approach which allowed a few extra sorts of moves along the way, and with a little experimentation, managed to find a way to achieve aerodynamic perfection.
Looking back on what I was doing, it seems pretty obvious that I was trying the same thing over and over in the hope of finding a different outcome (Yip, I know that definition!) – and it was only when I noticed that there were some features of the pieces that I hadn’t actively used yet in my assembly process, that I realised I was missing something important … nothing’s there by accident – this is a great design.
Brian’s website still has these puzzles listed and I heartily recommend them – don’t think of them as a level 13.4 burr, think of them as a tough Kumiki puzzle, and if you’re like me (an AMATEUR!) you might stand a better chance of conning yourself into solving it.
Posted by allard at 21:01