This post looks at a few locks that have recently been perplexing me. 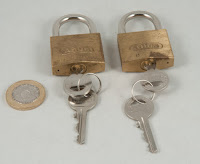 First up is a pair of Marcel Gillen-doctored locks that came courtesy of a friend who was down-sizing his collection. For all intents and purposes they look like a pair of standard ABUS locks. They show no outward signs of tampering, yet inserting a key and turning doesn’t generally have the desired effect… and shaking them results in at least a little rattling, which is a bit non-standard for such devices.


Each lock comes with a pair of identical (yes, I checked – and FWIW that’s a good idea!) keys, neither of which appears to unlock its padlock.


These locks have been well-and-truly doctored and need some careful attention, more than a little trialling-and-erring, and it may help to try and picture what could be going on inside there.


Find how one of them works and you might think you’re onto something for getting the second one open, and you’ll be wrong!

Their respective modifications are somewhat different, and while one of them offers a fairly short solution the other requires several more steps and can be a little fussy… but both will behave predictably in a practiced pairs of hands.


A really nice little piece of puzzling history – with no hint of anything untoward on the outside of the locks.


Next up is a Hales-special – Padlock SH-AW. Shane loves his locks and a little while back I managed to put him in touch with a pair of those Gillen locks – and I think he rather enjoyed them, to the extent that he promptly went out and bought some unadulterated padlocks with a view to adulterating them.


Having approached Marcel for permission to have a bash at making his own versions (and getting the blessing) he set about milling dirty great chunks of brass out of the locks and then playing around with the innards – to produce his take on one of Marcel’s locks – with a twist – because, well, why not take the opportunity to make it even harder (and in the process make picking the lock well-nigh impossible!)?


It arrived in the post, and even though I thought I knew the basics of what he’d done, I still struggle with it – a lot! 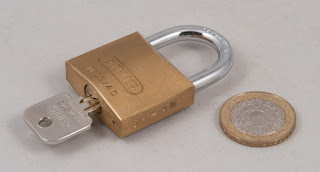 Shaking this lock produces quite a lot of rattling inside there – a lot more than the Gillen lock it’s modelled after in fact… is that a clue?


This one’s tough! In fact after more than a month with it, I still don’t feel I have it beaten – it sits on the desk where I can pick it up in between bits of work on the PC and try variations on the “moves” – but I still haven’t found the killer combo that opens it every time…


At our last MPP Shane brought along a series of photos of the modification process and it is quite incredible to see just how butchered the lock gets during its modification, and yet after being rebuilt, it could easily pass as being new-in-box … if not for the stamped personalisation on the side (SH-AW) it would still look like a pretty unassuming lock – albeit one that won’t open unless you treat it just right!


Thanks Shane! It means a lot to have a personalised thoroughly-Hales-adulterated lock in my collection. 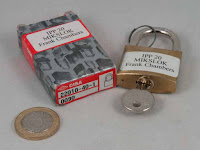 The third in this post is another little piece of IPP memorabilia - Frank Chambers' IPP20 exchange puzzle called Mikslok (with not a trace of Corian in sight!). 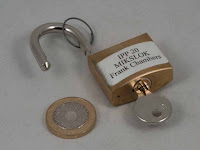 Another doctored lock, this one also rattles a bit when shook...

Insert the key and turn - nothing... in fact it won't turn! You'll need to summon your wits and experiment, but it shouldn't take too long to find your way in... interestingly I've managed to find two distinct ways to unlock this one. :-)

As you'd expect, even though you KNOW that he's had to doctor the insides somehow, there's absolutely no trace of any form of mistreatment.

Next up is a rather unusual-looking handmade lock from India. It all looks pretty standard if you overlook the rather odd angles on the key and the keyhole.


Simply inserting the key and turning results in you discovering that the key gets blocked just before it might do something useful … ah well, perhaps the key turns the other way? Nope! Same result… 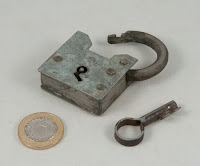 Turns out it employs a reasonably standard trick that shouldn’t take a hardened puzzlist too long to deduce.


Not the prettiest lock in the collection (that would have to be one of Rainer’s beauties!) but it came from a dear friend with a nice back story behind it… which makes it special.


Last up is an altogether different lock! Designed and manufactured by Louis Coolen (with a little help from Shapeways) this is a little sequential discovery puzzle in the shape of a lock. Louis had been working on this design for a while and had pretty much perfected it in time for IPP35 – so he took a bunch of them to Ottawa and I suspect that he didn’t go home with many of them.

It’s a cute little padlock in white strong and flexible selective laser sintered nylon – one the front there’s a series of H-shaped cuts … there’s something where you might expect to see a keyhole and you can feel that the shackle will probably come out at some point, but at the moment it’s well and truly trapped.


It’s important to note that every little detail of the design (and implementation) has been deliberate – nothing has happened by chance, so if you spot something, or think that doing something unusual as a result of the materials used might help, then either it’s part of the solution, or it’s a red-herring – but it’s not there by chance… Louis spent literally months and months refining every aspect of the design and nothing had been left to chance in there…

Which makes it a rather delightful little sequence of steps to finally open the lock – from an initial reveal and release, to working out what the heck to do with the tool you find, until eventually the shackle can be removed.


Great design Louis! A really fun little puzzle to work through…
Posted by allard at 19:06