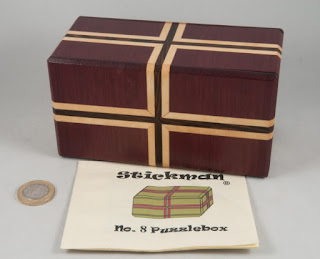 This is a truly gorgeous Stickman Puzzlebox. Rob has clearly spent a huge amount of effort on making this box look like a stunning, standard sliding panel puzzle box. Of course it isn’t, Rob doesn’t do standard-anythings!

Rob’s description of this puzzle points out that he’s implemented a rather ingenious set of three way switches on the panels, so rather than being either this way or that, the internals will depend on how many times they’ve been this way or that…! 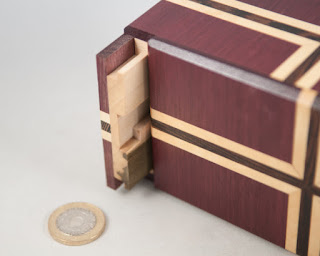 There happened to be an MPP shortly after I received this box so along it went and Louis duly solved it in very short order – showing me an open drawer in the base before promptly locking it all up again… of course when I tried, I ended up doing battle with those little switch-y things and getting nowhere fast… actually, that’s not quite true – I could get some useful stuff to happen and managed to remove a bit which I thought would be useful, but I couldn’t get it past the next stage and ended up cycling between half-open and fully closed…

A few other folks managed to open it and I had a good go at it a couple of days later, only to manage to break one of those ingenious little devices allowing the top panel to come off entirely – of course I still couldn’t get it fully open, even with the top panel removed! (That probably tells you a lot about (a) my puzzle-solving skills and (b) Rob’s puzzle-making skills!)

A quick email to Rob resulted in a detailed reply on how to go about fixing and reassembling it… and a couple of weeks later I managed to find some time to drill out the remains of a little dowel and replace it, before reassembling it… 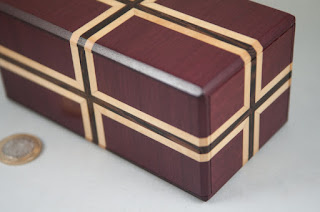 Once I’d done that I got my trusty tester to confirm that it was all working properly (Yip, I still hadn’t managed to open it!) – which he duly did smiling broadly while displaying the open drawer, again!

…now, a few weeks on, I can finally say that I get it – it’s very sneaky… understanding that three-way switch is crucial, but there’s even more to it than that… it is fantastic!
Posted by allard at 20:54