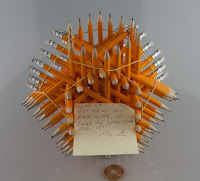 Watson! What have you done?

I first came across pictures of George Hart’s 72 Pencils structures on the internet ages ago. I’d thought to myself “Those look interesting,” and mentally filed away a note to have a bash at making one at some point and left it at that. And life was good. 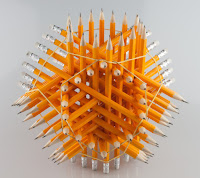 And then I bumped into Martin Watson at Peter’s EPP – one of his puzzle “finds of the year” was a copy of 72 Pencils that he’d put together for himself… along with a few variations on the theme that he’d brought along to trade away (because, he keeps telling us, that Alice has told him he needs to get rid of them because they don’t have enough space for any more puzzles – it’s been a theme for a while now!).


I didn’t have anything there to trade for one and Martin wouldn’t accept cold hard cash, so he ended up insisting on giving me one – just as well I’d driven across and not taken the train! 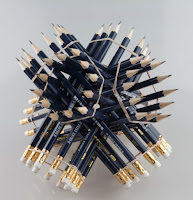 …and within a couple of days I’d ordered several hundred pencils from my favourite on-line retailer (other major rivers may exist) – you should see the weird recommendations I get on there now!


The following weekend I settled down in front of the television with a handful of rubber bands, 150 pencils and my iPad tuned to a particular website. 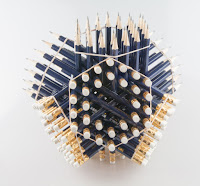 Starting with a fistful of banded together pencils, I began the process of inserting pencils through the major axes, adding lacky bands – finding the fourth axis – the only vaguely tricky part – and then shoving pencils through every single hole I could find for the next hour or so…and swapping lacky bands every now and then when they got too tight.


When it started getting reasonably large, I started paying slightly more careful attention to the shapes and getting things even across the different sides until I had a completed set of neat hexagons on each side, all with four pencils along each edge. 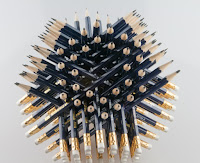 From there it gets fun – man-handling the whole thing to get everything neat and tidy and all the ends neatly lined up… check on the lacky bands and get them evened out, and then you can remove the inner layers of pencils – until you’re left with just a layer or two in each hexagon – et voila!


Now the next step, if you’re keen, is to glue the corner sticks in place on each side…which will allow you to ditch the lacky bands for good… makes things look neater … 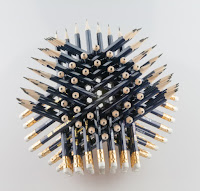 Oh, and a couple of words of warning: if you’re using pre-sharpened pencils, you will stab yourself – probably multiple times, and you will end up drawing all over whatever surface you’re using to align the pencils from time to time – I spent a good ten minutes erasing the esoteric pencil markings that covered our coffee table after putting that one together… and I now put a sheet of sacrificial paper on the desk / table although the scribbling isn’t quite Jackson Pollock!
Posted by allard at 06:32