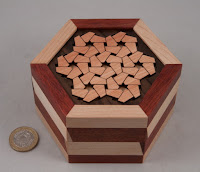 I feel very guilty about not writing about this box yet… I’ve had it for months, played with, solved it, enjoyed it, but not yet blogged about it… I am sorry.


Let me rectify that now…


Just before I left sunny UK for a cruise up Alaska and a trip to Canada, with some puzzling thrown in for good measure, I received an email from Robert Yarger offering me a copy of his latest Puzzlebox – a collaboration with William Waite. You’ll know me well enough by now to know that I don’t turn down invitations like that, so I winged some Paypal across to Rob and then had to do something really hard: I asked him not to sip it for three weeks so that there would be no chance of the package rocking up while I was out of the country enjoying beavertails. 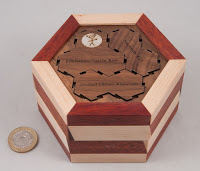 Rob duly shipped it over just after I got back from IPP35 and it didn’t take long to arrive.


Quite a few of Rob’s previous puzzlebox designs have incorporated a nod to another genus of puzzle, like his Lighthouse incorporating elements from Hoffmann threaded puzzles, kumiki puzzles in The Little Game Hunter, automata in his Checkmate Box and sliding tile puzzles in the aptly-named Sliding Tile Box.


The Edelweiss Puzzlebox incorporates a neat tray-packing puzzle designed by William Waite to provide the locking mechanism. At the start of the puzzle you have the pieces neatly packed in their place on one side of the box… with the box very securely locked. On the opposite side there are some similarly shaped bits forming a trivial tray-packing puzzle – unfortunately those bits won’t unlock the puzzle!

Your goal now is to pack the first set of pieces into the two trays, one on either side of the box – get it right and you’ll release one side of the box and gain access to its secret compartment… as long as you open them in the right order – else you get nowhere at all!


Find the right assembly and you’re presented with either a patchwork of little Swiss flowers (hence the puzzle’s name) or a blanket of snowflakes – slot them into place in the appropriate tray and you’ll hear a set of satisfying little clicks as the magnetic locks all slide into place and allow their compartment to open. 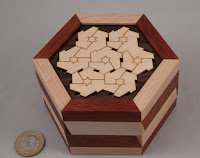 Open it all up and you have to admire the elegance of the implementation of this locking mechanism – the tray packing puzzle needs to be properly solved and the two trays need to be solved in the right order – and the mechanics behind enforcing those rules is wonderfully simple - a really clever design.


My favourite thing about the Edelweiss Puzzlebox? It arrives in a solved position but you’re forced to scramble it and re-solve it before you can open the first compartment! … and opening the second compartment can be done with a flourish if you’re so inclined.
Posted by allard at 10:12