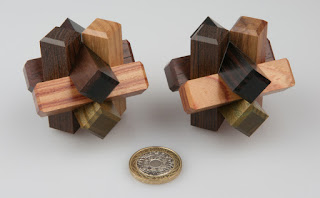 A few months ago I treated myself to a pair of puzzles from Lee Krasnow: a matching set of a Diagonal Burr and Coffin’s Pseudo-Notched Sticks… I’d loved the idea of getting a pair of these to have lying around to demonstrate to non-puzzlers that what-you-see isn’t necessarily what-you-get with puzzles – in fact sometimes those darn puzzle designers try and use that against you.
(Shock! Horror! No, we’ve never been caught out like that, have we?!)


The standard diagonal burr is made up of six identically notched sticks that slot together in a standard six-piece burr shape except that the sticks are all on the diagonal instead of being flat against one another… pulling any set of adjacent pieces apart will almost instantly reduce the assembled puzzle back to the pile of pieces it started out as – and assembly is only slightly tricky as it needs to be built in two sub-assemblies that are offered up at the end. 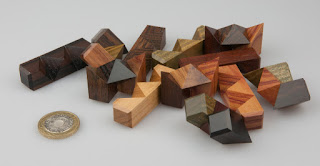 Pseudo-Notched Sticks is another animal altogether – designed to look exactly like its simpler brother (aka ole Notched Sticks) when it’s assembled, there is no hint of familial resemblance when looking at the unassembled pieces… and indeed the standard approach of gripping adjacent pieces and pulling them apart sideways won’t help you disassembling this guy at all, in fact you’ll be pulling against yourself all the way!


Lee’s set comes beautifully presented in his customised boxes, with woods neatly matched between the two puzzles so that they actually look pretty darn similar when they’re assembled next to each other. As you might expect with Lee, though, the matching goes a lot deeper than just choosing bits of similar wood… while the standard diagonal burr is normally made of single sticks with notches cut in them (can you tell where the name comes from yet?!) Lee’s copies have the sticks made up of three separate pieces, so that when you examine the two puzzles next to each other there’s no visual clue as to which of the sets is Pseudo and which isn’t… a thoroughly bonkers attention to detail that deserves calling out!

One of the little delights of having a perfectly made set of matching pieces is the ability to put together some Franken-puzzles combining bits of both sets – and still producing a set of matching puzzles… neat, eh?

Having just written about the standard Diagonal Burr, I should mention a couple of variations on the theme from Mr Puzzle that turn the simple puzzle into a somewhat less simple one…

First up is a Stuart Gee design called Diagonal Twins that mates a pair of Diagonal Burrs along a shared axis – although you’ll need to think about the axis a little… a few of the pieces are a little unusual but most of them are your standard common-or-garden notched sticks… the number of non-standard sticks gives a pretty good clue to how they’re going to be used, but I still found I needed to think things through to find the appropriate assembly. 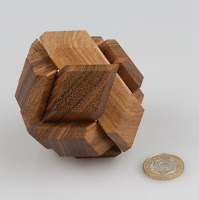 Brian Young’s Insoma Burr takes things to an all new level of complexity, however. On the outside it might look a bit like a stylised diagonal burr, and it certainly comes apart like a diagonal burr, the insides are nothing like a standard diagonal burr… each of the main pieces has a piece of a Soma Cube attached to its centre, with the final piece (because a Soma cube has seven pieces) free to be placed in an appropriate place.

Now if you know your Soma cubes well you’ll know that there are 240 possible cube assemblies – however you’ll find that attaching them to the insides of a diagonal burr will restrict the number of achievable assemblies quite a lot – in fact it restricts them to a single solution… making this a very challenging somewhat distant relative of the standard Diagonal Burr…
Not to be taken lightly!
Posted by allard at 07:37