[Thanks to Gerard for offering this (my first ever!) guest blog post about a very special, unique puzzle... enjoy!]

This is, I believe, the first guest piece on Allard’s brilliant blog. So I feel special and I also have something quite special to talk about. 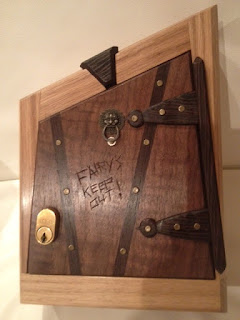 By way of introduction, I’m Gerard, a puzzle collector (mainly puzzle boxes though I tend to stray into buying other puzzles on occasions - much to the distress of my credit card!), and I often use puzzles in creative thinking workshops which I deliver. You can hear more about these workshops if you’re interested here.

First up, a bit of expectation management. The puzzle I’m about to describe is not available to purchase and was made strictly as a one-off. It will never be for sale as I’m never going to part with it. Given that it’s a one-off, there are a few spoilers below.

It was a gift made by Shane Hales, a relatively new burgeoning talent on the puzzle-making scene. Shane made it as a one-off and the look, approach and ideas were all his. Some more expectation management before we go on – I’m afraid that Shane doesn’t do commissions as he also has a full time job.

When Shane dropped me a line to say that the box was ready, to say I was pretty excited is a complete underestimate as I had heard rumours on the puzzle circuit that a lot of thought had gone into the box and Shane had teased a few people with some of his ideas. I had no real idea what to expect though was envisaging a typical small wooden puzzle box. We met in a café and following some pleasantries he passed over a large, beautiful, heavy, wooden box with an intriguing design. On the front was a locked hinged door with the words “Fairies keep out” scratched onto it.

The waitress in the café saw it and immediately said “Wow, that is so beautiful”. The people opposite us in the café stopped talking and stared both curiously and impressively at the box.

I was so taken aback by the box that I didn’t immediately twig that it had been made to complement Mike Toulouzas’ Fairy Door puzzle box. It was made with Mike’s blessing and has a bit of a ‘goblin’ feel about the design which makes it fun. Shane had the initial idea from the film ‘Beetlejuice’ a few years ago and then with Mike releasing the Fairy’s Door in 2015 it gave Shane the inspiration for the Goblin’s Door. 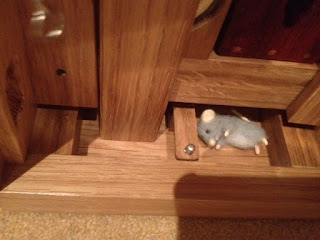 What was immediately very apparent was there was a huge amount of work put into the box and its creation and so I decided to take my time with it and spent the next few weeks exploring it, playing with it but mostly admiring it. In essence, it is a sequential discovery box combined with a few secret compartments and treasure to be discovered. All the things that I love about puzzle boxes brought into one.

The other thing I love to have is a solution. Ok, I know there are some members of the puzzle community out there reading this and putting me into the ‘feeble’ category of puzzle solving. That may be close to the truth but I have in the past broken bits of puzzles by forcing pieces that shouldn’t be forced or not solved them because whilst I thought that something needs to be yanked, I was just too afraid to do it in case it shouldn’t be and I end up breaking a piece. Shane obliged my request but rather than some hints written on a scrap of paper as I was expecting, he put together a comprehensive colour booklet giving step-by-step solutions with photographs to opening the Goblin’s Door. So whilst I might have a hunch that perhaps something pulls up or could be moved, before doing so I can check that I’m on the right lines and so avoiding potentially damaging anything. It meant that I could really enjoy the box and explore it with ease.

After some searching on the outside of the box, pretty soon I found some tools (though they were cleverly hidden) and then the first  challenge – using them to pick a lock. There’s a sense of achievement in getting through this stage and opening the door – particularly if, like me, you’ve never picked a lock before (honest). But of course having got the door open, I realised it only opens so far with a chain preventing it and a creepy hand poking out (yes really!) to warn you of what lies within. So, another challenge to overcome – open the door fully – if you dare. 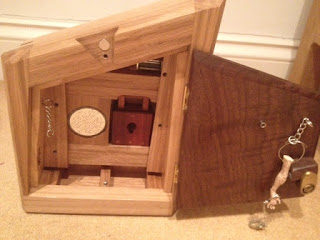 Once inside there is what I guess you might expect to find in a goblin’s home – an assortment of ghoulish items hanging up including a whip, a head of a goblin and oh, something that looks like a key – might be handy - need to get it but it’s screwed to the wall so must search for another tool. Each tool found has only one use and the steps are intuitive with one thing leading logically and creatively on to another.

More tools then need to be discovered as you explore the box, a mouse needs to be rescued, and the goblin’s hiding place revealed. Following a series of fun moves a back wall falls apart to reveal two excellent puzzles to play with: Robert Yarger’s Pirates Wallet Lock (very clever) and Luke Vandear’s Silver Eagle coin puzzle. I’ve never come across the latter before but suffice it to say it is amazing – a coin broken into tiny fragments of pieces that need to be put together like a jigsaw. Certainly something not to be done with bear hands.

The Goblin’s Door is a fun, highly enjoyable puzzling journey with lots of ‘aha’ moments and feelings of intrigue, achievement and discovery. It is also a beautiful piece of craftsmanship. It’s truly wonderful. My favourite aspects? Well the lock picking was especially fun (but rest assured I don’t think I will abandon the day job for a career in cracking safes just yet), the fact that getting the door open is only half the journey, and finding a mouse under some floor boards put a smile on my face.

Congratulations to Shane on a brilliant puzzle box and thanks Allard for letting me have this first guest review.