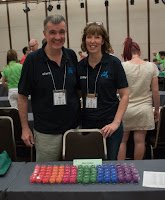 Saturday is Puzzle Exchange Day, so I don’t mind the 7am alarm – true to form Brian is in the lobby singing Jingle Bells... a quick breakfast and we all head to the exchange room where everyone’s keen to set up and get swapping – Gill and I lay out our wares and soon enough we’re off and exchanging.

70-odd exchanges later we’re exhausted – Gill’s done a brilliant job of keeping me organised and I have a suitcase full of new puzzles – life is good – and it does feel like Christmas!

Back up to the room for the obligatory loot shot with puzzles all over the bed before packing most of them into a box and heading down for the afternoon lectures.

William Waite gave a brilliantly illustrated lecture on Japanese keychain puzzles – complete with audience participation and knowledge sharing! Yoshi Kotani showed us how relatively simple it was to solve puzzles like Instant Insanity using languages like Prolog before Kathleen Malcolmson delivered a masterclass in producing the perfect dovetails for puzzles. The final lecture on Imaginary Cubes was really interesting – introducing the concept of an imaginary cube as a convex solid with three orthogonal projections that are squares before playing around with them and showing how some of them make an interesting puzzle… with the promise that they would be for sale the next day! 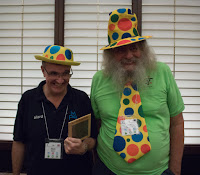 At the banquet that evening we shared a table with the Rothsteins and the Pawligers. The food was great, unfortunately the gannets got there before us and there was no dessert by the time we went looking for some – hey ho!

The first round was an exhibition Sudoku solve featuring Wei Hwa, Lixy and Taro Arimatsu – with Taro winning reasonably comfortably while Nick commentated, and fed Lixy the occasional peek at the solutions – although that seemed to back-fire once or twice. 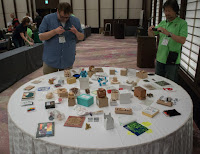 From there we progressed to an eight-person elimination solving contest, that I failed miserably to keep myself out of! We started fairly benignly with a 3*3*3 cube assembly, but I really made a meal out of it – at one point I even tried swapping some pieces with the solver next me in the hope that that would make for an easier puzzle… it didn’t! But it did raise a few laughs… when I eventually managed to solve my first puzzle and move on to the next one, several people were already onto the final disentanglement round. The tray-packing puzzle went a bit better and I didn’t end up spend an embarrassingly long time on that one… so I managed to at least make it onto my final puzzle before we had two winners form our round of four… and I have to say that I was in no way ashamed to have come third to Wei Hwa and Markus!

Another elimination round produced the four finalists who were given a suitably more challenging series of puzzles to solve… culminating in the first two to reach the last puzzle being given a pair of monstrous Chinese Rings puzzle – the sort that will literally take you years to negotiate – in spite of that both of them laid into them with relish! When the others had almost caught up, the first two (Wei Hwa and Markus) were then given a more reasonable disentanglement to attack, with Markus triumphing over Wei Hwa in the end.

It was great fun and all of us “volunteers” were given a prize – so I ended up with a sweet little Puzzlemaster branded version of Cast Dolce.

…more puzzling in the Design Competition room ensued after the banquet wound up.
Posted by allard at 07:58