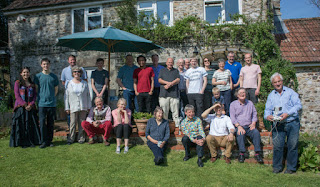 ...it seems this blog is turning into me writing about my puzzling gatherings again... and this one will be another of those...


A couple of weeks ago Nick was in town for the Red Bull Escape Room World Champs, and he had some time free the day after it all wrapped up, so he invited a couple of us to partake in a little recreational (i.e. non-championship!) escaping. He’d booked a session at the Crystal Maze Experience in London and a gang of us duly met up at the appointed hour via coffees at Mickey Dee’s and my attempts at walking right past the place - Nick spared my embarrassment by yelling at me as I walked on by...


Our suitably camp Mazemaster arrived and introduced himself as Trinket (or Barry for the TripAdvisor review if you didn’t like him! - He looked like a Trinket though...) and started by getting everyone in a suitably silly mood with some wonderfully dubious banter as he got to know us a little. Once that was done, we were whisked (jogging!) into the bowels of the maze, winding our way from Olde England, sliding into the Aztec zone (with real sand on the ground), floating through the future in space (the sight of Ali riding a dodgy-looking thrusting pink “rocket ship” will remain with me for a very long time), the industrial zone, and finally getting our minute’s glory in the dome trying to catch bits of gold foil... much silliness and a whole heap of fun - even if we didn’t even come close to troubling the leaderboard at all! 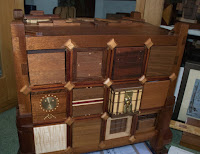 From there we hopped on the tube to Shepherds Bush (insert own joke here) for a quick bite to eat before attacking “Sherlock, The Game is Now!”. By then we had accumulated sufficient folks for two teams and we separated into a serious team and a slightly less serious team... no prizes for guessing that I wasn’t on the former! Our team was made up of Nick, Anne, Ali, Steve and I - and after most of us had done the Time Run escapes created by the same team, we were really looking forward to this one... and the initial impressions certainly didn’t disappoint!

We started in what appeared to be a perfectly normal shop front for a service business - the attention to detail had been superb, with signage, posters and marketing material all themed with a wicked sense of humour for anyone looking at the little details... an anteroom literally looked like it could have been lifted straight out of the TV-series set and then we lurched into the game itself, where the rooms (5 parallel sets of them!) were incredibly well-dressed, and each (for there were several) had plenty of seriously whizz-bang technology- it was clear that no expense had been spared - it was definitely on a par with the Time Run production values. If I could have one grumble, it would be that a couple of times you find yourself up against a task to get a bunch of things all answered, before you can progress, and you only get a clue as to whether you’ve passed or failed when you enter the final answer - and then you’re greeted with a pure binary response... no clues as to which element might be wrong... and that got a little frustrating, especially when one of them seemed to be giving encouraging feedback all the way through only for us to be told we were wrong.
Unfortunately we didn’t manage to escape, but had managed to have a crack at all of the puzzles at least. In the wonderfully themed pub afterwards we had our free drinks and caught up with the other crew who’d literally smashed it.  Talking to them about one of the final puzzles that had stumped me, I wasn’t embarrassed given the solution required, and well-impressed that they’d managed to bash through it so quickly... these guys really are good! 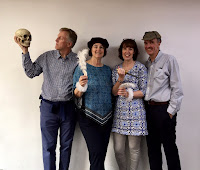 Most of the visitors then headed off for yet more escape rooms - in fact some of them literally toured the UK over the next week visiting some escape rooms that had been recommended on a particular forum...


Later that week, after many,many more escapes, Nick and Anne dropped by to visit for a couple of days so we took them off to Stratford-upon-Avon for a wander through the old historic town with its many rather wonky buildings, a Shakespeare-themed escape room, a visit to the MAD Museum, dinner at E. Moon’s and then an interesting gender-bending production of The Taming of the Shrew at the Royal Shakespeare Theatre.

Next day saw a walk in the woods with the hounds and breakfast in the village before some gentle puzzling at home, Nick got to play with a few puzzles he hadn’t managed to spend quite enough time on at home and ended up solving them all... we got caught up on the book and what still needed doing and managed to pull a few of the final remaining pages together.

Bright and early next morning we fed the tourists before heading down the motorway to Devon and the bustling metropolis of Luppitt. We made pretty good time in spite of the holiday traffic and found a bunch of puzzlers already making merry in the Puzzle Museum.


Steve and Ali shoved something heavy in my hand and refused to accept anything in return. (On a totally unrelated note, you WILL want to get a copy of the new Brass Monkey 3!) I collected a package of little Japanese puzzling goodness freshly off an aircraft... a bunch of new puzzles already in hand and I’d literally only been there a few minutes.

Through in the inner sanctum there were quick introductions and Nick seemed vaguely impressed with the set-up... truth be told, I didn’t see his initial reaction, but if he wasn’t impressed, I’ll eat my Panama! 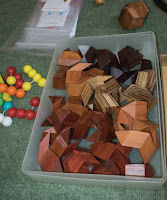 Chinny’d asked James for some pics of the internals of a family of puzzles he’s currently researching... James had already sent him the pictures but decided he should leave the reassembly to us... so we were greeted by a large pile of pieces all helpfully mixed together... in fairness there was a pretty solid clue as to which bits went together, in the woods they were made of. Ali steamed through a bunch of them, I managed to contribute a pair of them and so did Big-Steve... when they were done, Chinny had asked us to attack another family and we duly dived in...
...although it later transpired that I don’t know my Triacontahedrons from my Dodechedrons (or frankly my R’s from my elbow!) and Ali and I ended up disassembling and photographing 4 things already rather well-known to the Chin-meister... we had some fun, but it wasn’t any use at all to Chinny - it just terrified the heck out of Ali, Big-Steve and I - so not a total loss then!

James and Lindsey provided a fantastic spread for lunch yet again, although it always seems difficult to attract puzzlers away from the puzzles just long enough to actually take some fuel onboard.


Big-Steve and I spent a while in the afternoon photographing a set of Jean Bihourd jigsaws for Jim - we definitely got the right puzzles this time and Jim was suitably chuffed when I sent the files through to him the next day - at least one of my missions for the day had been successful! 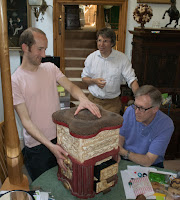 Ethel and Simon had each brought along a crate of goodies for the assembled masses to rake through and I managed to find a couple of little things I’d been looking for in Ethel’s crate, so I swapped them for a little pile of paper.


One of James’ visitors had brought along a puzzle stool (please don’t insert your favourite joke here!) he’d made when he was but a youth... and twenty years later it managed to keep several stout puzzlers at bay for more than an hour - they got it in the end and then enjoyed discussing the elegance of the mechanism with its creator.


During the course of the day I discovered a new set of folding puzzles from Kohfuh which I’m looking forward to having a serious crack at when I get a chance to do some gentle puzzling myself... 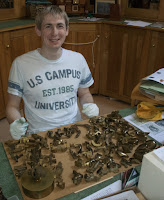 The English weather threw us a serious curve-ball that weekend - catching all of us out by being wonderfully sunny, in spite of the fact that it was a Bank Holiday weekend! So good it was, that we spent quite a while out in the garden launching pneumatic rockets skywards, and then spending a little while in between shots trying to find the errant little rockets among the trees and shrubs at the edge of the garden - serious pop-whizzzzzzz stuff!

During the course of the afternoon Rich decided he wanted a go at Richelieu... except that en route to Richelieu he spotted Goliath, so Goliath duly got stripped down into many pieces which he then thoroughly mixed up (without the need for any of us to encourage him or do some of it for him!).
During the course of the afternoon Goliath went together bit by bit, with Rich occasionally looking at a piece in his hand, realising he needed to backtrack a bit and duly tearing it all down again... my series of pics of the progress were a bit confusing given the not-altogether-linear-nature of his progress... when I left he was pretty close, and Michael duly sent me evidence that Rich had indeed triumphed over Goliath shortly after I’d left for home. 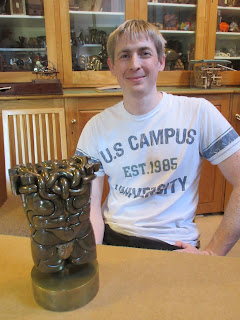