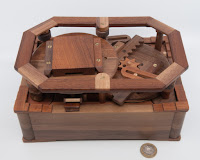 I won’t bother introducing this blog post by saying, yet again, that whenever Robert Yarger offers me a copy of his latest creation I don’t spend much time considering the options, I just send him the money, because I suspect that’s how most of them usually start - I don’t often read my blog, but I suspect that’s accurate.


Let’s just start with the puzzle itself this time - it is big, and there’s clearly stuff moving, nay, rattling around inside... this has scared a few puzzlers concerned that their latest prize may be damaged... rest assured, it ain’t, it just comes with some spare parts(!). (More on that later!)

The introductory notes for this puzzle tell you that it has a few challenges, with potentially more to follow in the future. Your first task is to simply open the box... which might be a lot simpler if the Stick-meister hadn’t built a rather complicated mechanism into the lid that would appear to have it trapped rather firmly shut.

Experimenting with the various elements of the contraption is fun, and it slowly yields an improving understanding of how the various bits and bobs interact - some of which is visible, and some of which needs to be deduced. Once that gets clearer, you can start working out how the lid is actually locked up and what you might need to do to free it... bearing in mind that there’s probably going to be a useful and a less useful order for attacking things in.

Get the lid open and you’re greeted with a bag of bits and a screwdriver... and a much larger challenge!

Rob’s intention at this point is for puzzlers to use the new bits and pieces, and most of the old ones, to construct a new locking mechanism on the lid... and he admits that’s a pretty serious challenge... one I did not manage! (And in my defense, most of my mates with a copy didn’t either!)

The usual solution booklet includes complete instructions for assembling the alternate challenge, and also note that in assembling it, you actually still won’t necessarily know how to solve the next challenge - which was enough encouragement for me to peek into the instructions and assemble my next challenge.... and it’s true: you can assemble it and still not know how the heck to unlock it all. (You’re effectively screwing it all together in a locked state and not using the mechanism at all...)

Solving the second challenge is just as much fun as the first, if not more, given that you’ve built it and still don’t even understand it!

It is complicated and a little bonkers, but you have to love the idea of a do-it-yourself puzzlebox, especially one from the Stick-meister!