Almost eight years ago now (yikes!) Jack Krijnen made a gorgeous little Level 5 burr set that I raved about over here. Five years ago he produced his version of the Ultimate Burr set, and yes, I raved about that one too. This year Jack’s gone even further out on a limb and produced The Phoenix Family Burr Set – and yes, I’m going to rave about this one too!

The Phoenix Family comes in a gorgeous little walnut box, this time complete with an inlay of a phoenix rising from the flames. Inside the box you’ll find 45(!) burr pieces with their neat little tweezers for grabbing the pieces you want without having to tip them all out on the table) along with a set of cards covering the family history and laying out the pieces required for assembling a number of 18-piece burrs… yes, this is the first burr set designed specifically for 18-piece burrs. 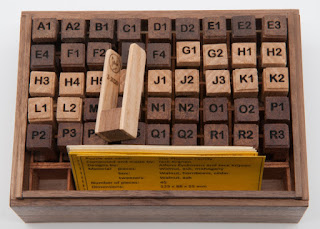 The cards explain that the genesis of a large number of the 18-piece burrs we know today, including Supernova, Tiros and Burrly Sane for Extreme Puzzlers, can be traced back to an original 2008 design from Alfons Eyckmans called Phoenix. Alfons and Jack developed the ideas in Phoenix to produce a significant number of 18-piece burr designs over the years, and now Jack has put together a burr set to allow the truly masochistic puzzlist to experiment themselves and explore the differences between Tiros and Barones all in the palm of their hands. The cards give the piece sets required for 12 high level burrs, starting from one requiring 134 moves (so trivial it hasn’t even been named!) right up to the 166-move Supernova. If you ask Jack nicely (of course I did!) he’ll also send you a handy BurrTools file that will let you explore all the possible assemblies with this set… and give you a handy assembly guide (‘cos there’s no way in heck I could assemble any of those without using BurrTools!).

Assembling any 18-piece burr always starts out like an exercise in dexterity – at least until you’ve got enough woodwork in place to start getting things to hold together on their own… and the joy of Jack’s little burr sets is that the pieces are small enough that you can easily support quite of few of them in odd positions while you’re starting out the first ten or so pieces – don’t get me wrong, you’re still going to need a bit of dexterity, but at least the weight of the pieces isn’t also playing against you! 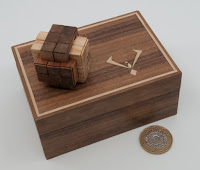 Jack’s given you enough pieces in each colour so that when you’re constructing the main puzzles, you’re always going to have matching woods in each plane. Neat, eh? The pieces all have their identifiers laser-engraved on their ends so you can spot them easily in the box - a lot of thought has going into the selection and design, and a huge amount of care has gone into crafting this wonderful little set of monsters.

It’s hard not to be impressed with The Phoenix Family! – Thank you for providing another inspiring little burr set, Jack!