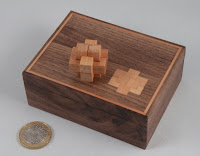 A little over a year ago Jack published some pics of a burr set that he’d made for himself on one of the puzzle forums I follow. The pics looked pretty incredible, and then when I got the chance to see it in person at DCD last year I was totally bowled over. Outside the box was decorated with a stunning inlaid burr shape and a frame and inside there were 42 burr pieces and a set of cards with a heap of level 5 burr definitions laid out on them. Oh, and the one thing I haven’t mentioned yet are the dimensions – the box was about 12*9*4.5 cm. It was a masterpiece in compact design and craftsmanship.

Earlier this year Jack mentioned that he might be making a few more copies of his burr set and I piled in almost immediately and asked if I could be put on a waiting list, if there was such a thing – and happily there was!

A little while later Jack began teasing us all on-line as he drip-fed out pictures of his manufacturing process without actually saying what it was that he was producing ... 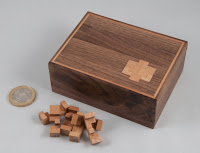 It started with an enormous pile of sticks, which then turned into burr pieces, and then the panels for the boxes appeared and eventually there were pics of the gorgeous inlay work – and he announced that he had eight boxes available and that they’d be ready in time for DCD 2012.

I was over the moon when I got the email from Jack asking me which type of wood I wanted the box to be in (he had made them in walnut and mahogany) and then confirming that I’d be able to collect a walnut box from him at DCD. <Fat Grin!>

...and so on the DCD Sunday I met Jack again and was handed my little masterpiece...

The pics should give you an idea of the size of this burr set ... it’s dinky!

The burr pieces themselves are made from 1cm*1cm stock(!) and have been really accurately cut so they fit together perfectly when assembled. Each piece has been stamped with its identifier on one end and laid out in numerical order in the box and when they’re not being played with, the pieces are all housed in their own little pigeon holes inside the box. In a separate compartment to the left of the burr pieces is a set of neatly laminated (so you won’t smudge them!) cards with 162 unique Level 5 burr problems for puzzlers to get their teeth into ... as well as a number of Level 8 and 9 problems to tax the little grey cells with. And the piece de resistance – a little pair of wooden tweezers to remove the individual burr pieces from their resting places because you couldn’t fit your fingers between them! Jack’s thought of everything!

I’ve had a go at a few of the constructions so far and realised that I still have an awful lot to learn when it comes to assembling burrs ... I’d thought I was doing OK working through my Creative Crafthouse set of lower level burrs – but this one definitely steps it up a gear in terms of difficulty.

I’ve managed to do about half of the ones that I’ve tried but I’m determined not to let them beat me so I’ve printed off a list of them so that I can mark up the ones I’ve done and come back to the others at a later stage... I suspect this little box is going to provide many, many hours of pleasurable puzzling. 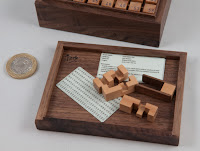 Thanks Jack – it is beautiful – the first Krijnen-creation in my collection is going to take a lot of beating!

...it turns out that my fellow Midlands Puzzlers had also spotted Jack's handiwork and in the end, four out of the six of us who travelled over to DCD this year came away with one of these sets ... and another of our number who hadn't made it over also managed to snag one, so in the end five out of the eight sets that Jack made ended up in MPP-hands - you can't say we aren't keen and recognise great quality craftsmanship! 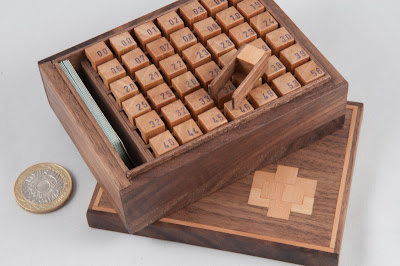 [Rox also managed to snag a copy of this set and you can read her thoughts over here.]
Posted by allard at 09:12