Laurie Brokenshire hosted a Gathering for Gardner Celebration of Mind at his home a couple of weeks ago – a few of the Midlands Puzzlers made their way down to Portsmouth. Ali and Oli drove down from London(-ish) and I picked Nigel up on my way down. 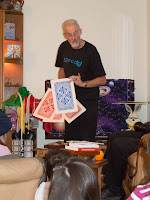 Martin Gardner, just in case you haven’t already come across this incredible gent, probably did more to popularise mathematics and puzzles through his columns in Scientific American and his 100-or-so books, than anyone else around. He introduced folks to recreational mathematics through puzzles and interesting articles that were pitched at just the right level to appeal to anyone with a little curiosity. I first stumbled across his books while I was still at school and found that the way he described interesting concepts was always thoroughly accessible and drew the reader in ...

Fans of Martin’s work started meeting every couple of years at the Gathering for Gardner conferences held in Atlanta in since 1993, and when he passed away in 2010, they decided to commemorate his birthday (October 21st) with Celebration of Mind events around the world. Anyone can organise one and log it on the G4G web-site and there are heaps of resources and suggestions on there in case you need any ideas.

This is the third year they’ve been running G4G CoM events and unfortunately I hadn’t been able to attend last year’s Gathering at James Daltegy’s, so this was my first one...

Laurie had literally opened up his house for the day, we arrived just after the official start and the kitchen was already full of folks when we arrived. While we said hello to old friends and met new ones, Laurie got us a cup of coffee and showed us where everything was. I added a pile of Gill’s choc chip cookies and a chocolate tangram cake to the enormous array of munchies on the kitchen table.

All of the first-time visitors to Laurie’s were given a cook’s tour of the puzzles spread around the house and encouraged to have a go at virtually everything ... including the ski tow maze on the ceiling of his puzzle room. He’d laid out a rather large chess puzzle in one corner of the lounge, another had a huge array of disentanglements and the tables in the dining room groaned under the combined weight of Laurie’s IPP32 puzzle haul and his goodies from the last Gathering for Gardner in Atlanta ... and of course we’d all brought our current favourite puzzles along as well!

The numbers gradually swelled until there were thirty three of us in attendance – quite good given that the theme for the Gathering was “three”, and it was the third CoM – pretty good planning on Laurie’s part I reckon. ;-) 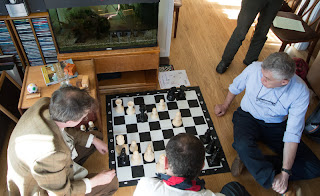 The morning and the early part of the afternoon were given over to mingling, chatting, puzzling and playing with unusual objects, with several folks taking a turn at the True Mirror with and without the Reversing Goggles. Very trippy and more than a little disconcerting ... especially when you wink at yourself in the mirror and the “wrong” eye winks back at you!

The chess problem generally had a knot of people around it all day as folks would wander past, read the problem (White to move and mate in 2) and then spend a while looking at the board, bouncing the odd theory off the others who were there at the time before retiring injured. Every now and then someone would strike upon a particularly interesting attack that no-one else could refute and Laurie would be summoned over to adjudicate – but he always found a weakness in the attacks ... and all day I only saw a single person whisper a move conspiratorially in his ear and see him smile and admit it was right. It was a cracking problem, with plenty to try, but only a single rather counter-intuitive answer – and it stumped pretty much all of us all day long.

Ali had brought his latest purchase, a Morphing Cube by Gare Maxton along for us to play with ... and a couple of the guys managed it and I needed to get him to show me the solution after playing with it for ages ... and I’m not surprised I didn’t find it as the solution involves some interesting articulating of the pieces to inveigle them into the structure ... it’s a gorgeous lump of metal that weighs about 7 lbs – you wouldn’t want to drop this bad boy on your toe! 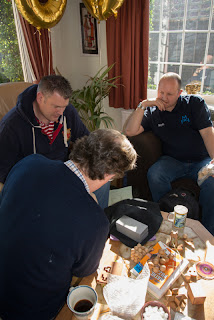 Simon Nightingale was wandering around the rooms with his three block conundrum. With no more than his usual showmanship, Simon introduces a special box containing three identical blocks, the box is covered with a black cloth and the three blocks are laid on top of the covered box. Folks take turns lifting the three blocks together, and then picking up just the top block ... and all without fail get a stupid “I don’t believe that!” look on their faces and those that haven’t lost the power of speech then ask how the single block can possibly weigh more than the three blocks together... theories of magnets and complicated devices hidden in the box abound and when everyone has had a go, Simon would show that there was actually nothing in the box and the effect has taken place entirely inside your head which has created the illusion for you... that one was a great talking point with plenty of analysis afterwards.

The afternoon saw a series of short talks on anything mathematical, puzzling or simply curious.

Frank Potts did a short talk about three-piece burrs, liberally peppering his talk with real-life examples, all of which were subsequently passed around the puzzlers to have a bash at.

Donald gave us a talk on some puzzle ideas he’s developing at the moment and several folks had a bash at solving some of the less trivial challenges during the course of the day.

Adrian Fisher, maze designer par excellence, gave us a talk that included some of his latest designs being implemented at attractions around the world. He’d brought along a model Ames Room that he used to explain one of his latest ideas that uses one group of visitors to unwittingly provide the entertainment for another as they wander around the life-sized Ames Room trying to make sense of it.

The talks were drawn to a close with a great magic show that baffled the adults and entertained the kids royally.

A bit more puzzling, chatting and grazing followed before Ethel took orders for the local Fish and Chip shop for fish suppers for all who were interested ... and Nigel and I took the impending dinner rush as our cue to head back up north toward Birmingham after a fantastic day.

It was wonderful meeting up with a bunch of folks who’d all found different aspects of Martin Gardner’s work inspiring – mathematicians, teachers, IT-folk, chaplains, builders, surgeons, salesmen, carpenters and (to lower the tone!) actuaries ... I think that says a heck of a lot about the reach and influence that he had. The world may be a poorer place for having lost him, but events like this sure go a long way toward inspiring a new generation.

Thanks Laurie and Ethel for opening up your home to a bunch of us for the day – I had a terrific time, met some wonderful new folks and was totally baffled by not just Laurie’s magic, but by several of the puzzles I played with as well.
Posted by allard at 16:00