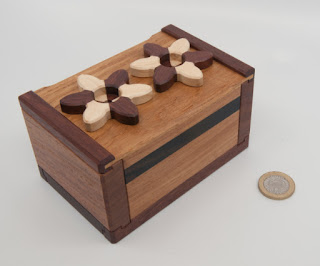 Lordy, that took a long time to finally solve… but I’m not embarrassed – that is one fine puzzle!

The Ixia Box appeared on Juno’s website a good few months ago, so I did the right thing and ordered a copy – mainly, as it turned out, for my mates to solve… I took it along to an MPP and several folks solved it – Louis showed me some of the aspects of the innards I hadn’t found yet – totally useless to help with the solution of course… and then helpfully popped a few rattlers in there to make my life a little harder…

From there it sat on my desk for the next month or two – occasionally getting hauled out and played with… I’d made a bit of progress fairly rapidly after getting it – you see this is a sequential discovery puzzle with a good few layers to solve. I powered through the first couple in no time at all but got totally flummoxed by the last layer… which happened to coincide with that MPP and all my mates solving the darn thing and making me feel pretty useless! Let’s start at the beginning though…

Ixia Box is named after the two flowers that adorn the top of the box – you might think they look like something else, but they’re flowers, damnit!

You’ll start with a little movement on those, err, flowers, and in no time at all you’ll have found a few tools and something interesting to play with…

The first lock is reasonably straight-forward, but rather nicely disguised or clued, depending on your point of view. Open that lock and find another altogether more interesting challenge… approach this one properly, and you’ll be wonderfully rewarded with a huge “A-Ha!” – unfortunately, there is a way to cheat, and you might find yourself cheating without even realising it… (if you get to the end and haven’t used some obvious tools, then you cheated here – go back and play… I promise you’ll like what you find!). 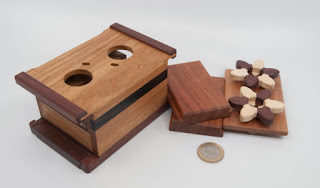 Which was where I was stuck for a couple of months… until I gave it a really good go and finally managed to find one interesting thing – which I couldn’t get to behave predictably for quite a while, so I persevered, trying different things and observing the outcomes… and then trying even more things, while observing even more, and then trying combinations of things and observations until finally, I had movement… and found my way into the final compartment – to free the two pennies left there by my puzzling friends. Whoop-de-doo!

Step back from the months of shame and embarrassment and admire the simplicity of this mechanism – the final locks are really a brilliant exercise in minimalist design – they’re literally as simple (and therefore as resilient) as they possibly could be… but until you solve them and open it and look at them, you’ll be convinced they’re broken – I was for quite a while!

I thought the Ixia Box was a really nice challenge from Juno… and if you’re interested, as I write this he still has a few available for sale…
Posted by allard at 17:30 2 comments: 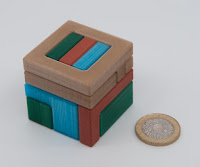 Rich Gain has been designing interesting interlocking cubes for a while now… and for almost as long, he’s been tinkering with 3D printing, and at the obvious intersection of those two pastimes, he sells printed copies of his designs.

At the last MPP he had a few things for sale and I piled in and bought a couple I didn’t already have.


Coronation Cube was Rich’s entry in the 2014 Nob Yoshigahara Design Competition. Seven pieces will form a 5*5*5 cube if you manage to coax them together properly…

It’s a long way from being a trivial assembly, and if you are tempted to invoke the gods of BurrTools, you will be sorely disappointed, for the gods will tell you it cannot be solved – which is all just really code for “some rotations may be required”.

Starting with a pile of pieces, it’s not too difficult to establish where each of the pieces needs to be as the result is going to be a cube… getting them there, is another story, however.

There are a couple of pieces, coincidentally the same colour, that would appear to be a logical end-game, so we concentrate on the rest of them for now…

Experimenting with the rest of them shows that there’s a lot of interlocking-ness going on in there… and a little rotating-ness along the way… and it’s weird, almost planned (!) how the colours seem to be getting used up together in the process… the puzzle rewards a bit of thinking along the way.

Printable Interlocking Cube #4 is a lot newer, and dare I say, a bit more challenging!

This one has only 6 pieces to assemble a 5*5*5 cube, but IMHO offers an even better challenge.

There are a couple of pieces that offer some pretty clear clues to their relative positions – it was pretty obvious to me how the blue and yellow pieces should go together and I spent a while working on that as a starting position… until I realised that there was in fact another way to combine them which turned out to be a better idea… so I spent a while working from there.

Actually, I ended up spending quite a while working from there!

Once you’ve got a few pieces correctly positioned, you can generally work out if the remaining pieces can complete the cube or not, moving onto another combination if that doesn’t really work… toward the end of that process you’ll end up with a pair of pieces to slot in, without a definitive answer as to which way around they should go… now comes the fun bit: trying to derive the order of assembly that permits the complete assembly – there are a lot of possible avenues to explore – most of which require some other starting combination of pieces.

It’s a serious challenge for a simple-looking six-piece puzzle… very rewarding once you finally get it all together, not least because of all the movements required toward the end to place the final couple of pieces in the right place… very rewarding!

Postscript: I took these two little puzzles along to Wil’s King’s Day Puzzle Party and watched a huge number of people play with them – most managed the Coronation Cube, but only a couple managed PIC#4 – clearly, it’s a decent challenge!
Posted by allard at 19:35 6 comments: 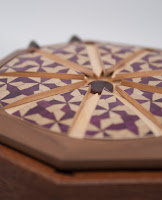 Jesse Born arrived on the puzzle box scene a couple of years ago and his work has been getting more and more rave reviews with each new production. My mates started buying his puzzles and they raved about them – a lot… so when he published some pics of little slices of pie that he was making for his current project, I decided I shouldn’t miss out on this one, and duly pre-ordered one.

Over the course of the following month or so Jesse teased us with a few more pics along the way, asked for the group’s opinion on the finish we preferred (and then duly went along with the group’s preference for a satin finish in spite of most of his earlier works having a glossy finish) and then shipped a bunch of them to expectant puzzlers around the world… 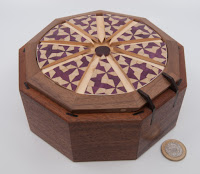 While mine was in transit my mate Jim announced to the world that this was probably his favourite puzzle of the year… my expectations ramp up a notch or three, and when it arrived it really is stunning – I mean, don’t get me wrong, Jesse’s photos are pretty damn good, but this thing’s even more gorgeous in the flesh – I waste no time in telling him that…

You get a nine-sided box – with an obvious lid decorated with slices of yosegi pie. There’s evidence of a hinge on one of the sides and the pie slices are all separated. Jesse’s description tells you that in order to unlock the box, you’ll have to slide all of the slice into the centre… OK…

So let’s start sliding them and see what happens… ah – slight problem – they wont slide in… or at least most of them won’t slide in… so we start fiddling around a little bit and then something really strange happens and catches me totally off guard – and I love it when a puzzle does that to me!

This opens up a few more possibilities, but soon enough I find myself down a blind alley with no means of progressing … with all bar one or two slices fully inward… and yet, nowhere near a solution. 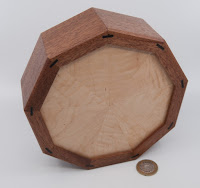 …and then it hits you, it’s been there all along – and I try a few clumsy attempts at enforcing my new theory on the puzzle, but none of them quite works properly… until I go right back to basics and theorise on something that seems even more promising – and find the right way to think about things – and allowing for a little bit of jiggling here and there, it all works perfectly from start to finish… with the last move unlocking the box allowing the lid to swing up and open – to show Jesse’s signature branding inside the lid…

…and it’s clear exactly why Jim is such a fan! The mathematics at the heart is wonderful – but the way the solution is fed into the box is very clever – I wouldn’t have thought that would work, and yet it does… and then there’s the small matter of implementing all of those rules in a wooden object… I don’t think calling it genius is going too far!

The icing on the cake for me is that Jesse’s left access to the mechanics for the interested puzzler – pulling out a couple of pins and pegs you can see exactly how he’s implemented the opening rules… if you haven’t had a look at it, do – you will be impressed…

When I told Jesse the box had arrived safely in the wilds of Barnt Green, he asked me to tell him what I thought, honestly, so here you go, Jesse: “I have only two words for you: Genius and Stunning!”