(I can see I’m going to need to swot up on my Roman numerals soon…)
This one was a little hectic… we’d just had a hut put in the garden for Gill to use as a new craft-space (yes, it’s called Jabba) at the start of the week and we were in the process of moving her in there and getting my study to move downstairs to make room for a new puzzle cave (Part 2) – when Friday arrived and I found myself at the airport collecting Louis and Wil off a KLM flight, Stefan off a Lufthansa flight and Rob off a train, before taking them all back to the chaos of chez Walker.
Gill and I had managed to clear enough out of the dining room so that we could actually feed our guests, but I coerced the younger visitors into helping me dismantle my desk unit and carry it down the stairs – actually I applied the screwdriver, they did all the lugging. With three quarters of the desk bits downstairs in their new home, Louis wandered up and asked for a tape measure – BAD SIGN – turns out my ceilings downstairs are 10cm lower than they are upstairs. Problem was there was less than 10cm clearance between the top of my desk unit and the ceiling upstairs… some bad language may have leaked out – we stopped for some dinner and then the lads – rather good-naturedly - carried everything back upstairs and we reassembled the desk… how’s that for a great start to a puzzling weekend?!

After all that excitement we treated ourselves to a rummage through Wil’s suitcases – just the puzzles, not his travelling gear. Most of us managed to acquire a couple of goodies that we didn’t already have and some puzzling ensued. I crashed somewhere around midnight and left them all still puzzling furiously… I think they all went to sleep at some point.
Next morning we loaded up on croissants and pain au chocolat before heading down to the hall where we found Angela and Peter had already set out their stall with books and puzzles for sale. We got the tables and drinks set out before most of the gang descended. 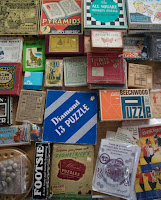 Tim set out several table’s worth of vintage collectible puzzles – all for sale at the blow-out price of £3 each. I picked up a few little bits as did several others over the course of the morning… even Wil managed to find a few things that interested him.
Angela knows my fondness for Martin Gardner first editions and she’d set aside a bunch of them for me – that part of the collection is growing slowly and I must make sure I spend the time reading them all…
Wil laid out his wares and there was a steady stream of folks raking through the crates and picking out new treasures. Ali seemed quite chuffed to find a copy of one of Jon Keegan’s puzzles lying there waiting patiently for a new owner.
I’d taken a pile of notched sticks along in the hopes that someone would assemble it into something less chaotic for me… I’d bought the sticks from Ethel back in February when we’d decided it was probably a copy of Cutler’s Square Rod Dodecaplex (SRD)… but one pile of notched sticks looks just like another to me. In the intervening month I got James to send me a copy of the solution for said assembly and I tried unsuccessfully to assemble it –having convinced myself that the notches weren’t quite what I needed for the assembly. I had another go at it when Chris came round one evening – unfortunately the two of us reached the same conclusion and I ended up asking James for a solution to another puzzle in the belief that I had a better chance of constructing that one with those sticks. (Cutler’s Spider’s Web in case you’re interested.) 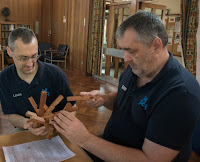 When that solution arrived it was clear I was mistaken so I resolved to get someone at MPP to build it for me… Louis, Steve and Chris began to assemble it and it was progressing reasonably slowly when I headed over to the station to collect Ed… and when I arrived back at the hall with Ed in tow, the lads were putting the finishing touches to the assembly, and I was well impressed. They seemed immensely chuffed with themselves – possibly more chuffed than they should have been and I discovered the reason for that when I went in search of my camera to document the success for the blog… at which point the giggling directed me to the assembly, which had my camera neatly secured inside it… so the camera-phone came out for the obligatory shot instead. (They’re a great bunch and actually extracted my camera and reassembled the whole thing for me…)

On the same sort of lines, Kevin brought along a bag full of Happiness (Cubes), in pieces since the last MPP – and Ali sat down resolutely at a table on his own and worked through assembling every single one of them, pronouncing them cracking puzzles when he’d finished.

Kevin had also brought along a large number of TICs which Rich duly worked his way through disassembling and leaving them in piles of pieces on the table while moving on to the next one… before eventually retracing his steps and reassembling the whole lot once more, in spite of the fact that someone MAY just have swapped some pieces between the piles.
Ed worked his way through all of the secret opening boxes available in the morning before pausing for a large kebab (hopefully his girlfriend doesn’t read this blog!). After said kebab he was in the mood for a challenge and stumbled across (figuratively!) the recently assembled SRD – felt all around it and announced that he was scared by it… but he really wanted to take a piece out… so he did. And another. And so on until the last 5 pieces fell on the table in a disorderly pile.

At this point Steve and a few of the guys decided that a teaching moment was upon them, and they duly talked Ed through the piece identification and the assembly - getting him to physically insert every single piece… which says quite a lot about (a) Ed’s spatial awareness and (b) Steve’s ability to describe objects and pieces in 3-space.

All of which leaves me as having failed to assemble a puzzle that my blind puzzling mate has done successfully.

Shane was in top form as usual – at one point he was having a bit of a rant about one of his neighbours when Ali and I both simultaneously asked him to tell us what he really thought – dissolving everyone within earshot into tears of laughter.

He did have more success on a particular Chinese padlock that Wil had found which has two keys and a shackle that could lock in two directions… releasing the alternate key each time… we’d all assumed that it was only possible to release one key at a time, but Shane managed to find a way to release both – without resorting to the rather well-equipped Locksmith’s workshop in his van.

Sometime after 5pm packed up and headed up the road to chez Walker for yet more puzzling over a gigantic fish supper sponsored by Ali. Thanks mate!

After the dishes had been cleared away, there was a throng of merry puzzlers around the dining room table trying to solve Wil’s increasingly challenging matchstick puzzles. He’d been challenging all comers with a fiendish matchstick equation all day, with successful puzzlers being gifted a copy of a very interesting symmetry puzzle from Vladimir – and solving that one was really FUN! (Even I managed to solve that one and I’m thoroughly rubbish at symmetry puzzles!) 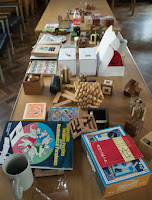 When Wil ran out of matchstick puzzles Steve ran out to the car and brought in what appears to be an old Japanese / Chinese book of matchstick puzzles that subsequently created huge amusement as they tried to work out what the challenges were and then how to actually solve them – that little book and a box or two of matches literally kept them amused for hours.
I crashed somewhere around midnight again, but have it on good authority that some of my guests were puzzling until just before the clocks went forward – particularly brave given that two of them had a mid-morning flight home…
Sunday disappeared into a haze of successive trips to the airport depositing various puzzlers for their flights home before I was let loose in Jabba to construct a couple of butterfly tables and some chairs for Gill… boy, did I sleep well that night!
Posted by allard at 09:12 2 comments: