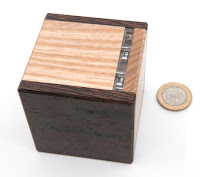 So when he announces a new puzzle box, they don’t tend to stay in the shop for very long. Multiball wasn’t an exception and sold out pretty rapidly… I managed to sneak a copy and have enjoyed getting my tiny little head around it. It took a while, but it was worth it.

The externals are all Ash and Wenge, with a little clear bit of acrylic offering a helpful(?) window – nice contrast, and the internals are walnut and some bits of stainless steel(!).

It purports to be a fairly honest puzzle with the clear little window supposedly there to help you work out what’s going on inside and come up with a strategy for defeating it all… but it offers a little more “help” than it ideally should – sort of like another puzzle with a similar feature that confounded me for jolly months – I thought I could see everything I wanted to, only to realise after quite a while that some of what I knew I could see was in fact a reflection or a diffraction and things weren’t quite where I thought they were… so I was a little weary at this particular little gift horse of a window.

You can work out where the main locking mechanism is fairly quickly, and you can see its and bobs moving around and interfering with one another, you can even work out a bit of a strategy for getting some things to happen and keeping others things from happening… sadly none of this seems to have any impact on your ability to open the box. 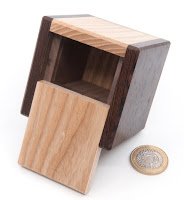 Experiment with a plan in mind. Deduce what is more successful and what is less successful, and open the box. Simples…

…and if you’re doing it right, you should be able to do it repeatedly in a few seconds each time, without any luck or dexterity required…
Posted by allard at 07:53 No comments:

I’ve long expressed the opinion that the one thing that you can recognise a Stickman Puzzlebox by, is the fact that you cannot recognise a Stickman Puzzlebox – they are all SO different – be it the styles, mechanisms or look of the puzzles – they are all different. So when Rob calls Puzzlebox #32, The Traditional, you can be sure he’s referring to something other than his normal style and approach – because there is no such thing.

In this case, he’s alluding to traditional Japanese puzzle boxes – #32 is his homage to their massive contribution to the puzzle community. And he’s really gone the whole hog on this one, not only perfecting the fine art of Japanese Yosegi, but teaching his apprentice Rick to do it as well so that he could contribute some of the Yosegi panels. 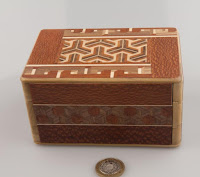 It certainly looks the part – with some wonderfully traditional Japanese Yopsegi patterns mixed in with a couple that have a distinctly more modern look to them… and the homage doesn’t just end at the decoration: Japanese puzzle boxes typically rely on interacting sliding panels to release their secrets and this one does that in spades!

In fact, when you first pick this box up and fiddle around with it, you might well be tempted to think that literally every single panel is covered with things that slide this way and that – this definitely ain’t just a traditional old Japanese puzzle box – this little guy’s on steroids!

In fact, this guy has been on my shelf-of-shame for absolute ages – gently mocking me… I could get myself about half way through the solution quite easily, but the second half eluded me… of course several of my good puzzling friends merrily opened it, pronounced it great fun and then locked it up again for me… without a single clue as to why I was getting myself so stuck…

…and then a couple of weeks ago, I decided it really needed to be joining its brothers in the new cabinets downstairs so I made a concerted effort at getting it off the shelf-of-shame… and finally succeeded in pushing through to the second half of the solution – a seriously broad smile ensued. 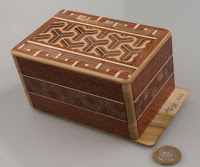 This isn’t so much an homage as it's a total reimagining, keeping enough of the underlying traditional elements in there for you to recognise and to lead you up the garden path, and then adding a few kickers that really don’t behave the way any self-respecting traditional Japanese puzzle box would – like moving one panel causes another panel to move in the opposite direction!

…it kicked my backside for more than a year – and I love it for that very reason!
Posted by allard at 12:59 No comments:

Finally! I bagged the last unicorn!


Slowly but surely over the past few years I’ve been closing in on completing my collection of the numbered Stickman Puzzleboxes. Last year I managed to find a copy of the Gordian Knot, leaving just one little unicorn left to find - The Lighthouse.

This year a mate of mine asked me if I’d like to acquire his copy, a remarkably short discussion ensued and some time later a little money changed hands and I bagged my final unicorn.

And I am delighted!

Not just because I’d been trying to complete that little part of the collection (again, I’m not addicted, I could stop any time I choose, but I’m not a quitter!) for a good few years now, but because it is an exceptional puzzle!


This puzzlebox is a serious piece of art, in fact I’ve known non-puzzlers to develop a particular fondness for this puzzle,  for this to be the one puzzle they hold on to when the rest of a collection is being sold... it is that beautiful!

Rob has spent a lot of time and love making the base look every bit the rocky outcrop that it’s supposed to represent... the lighthouse itself has some lovely detailing which really isn’t necessary at all, but sets it apart beautifully.

...and I haven’t even mentioned the turning work on there - some of it’s overt, and some of it’s a bit disguised and you only really spot it when you’re part-way through solving the puzzle.

This puzzle entertains throughout the solution, at first disguising the way in and later on with a wonderful little piece of theatrics if you treat it just right - the sight of a pair of secret compartments yielding their very existence is almost synchronized ballet.

It really is special, and a wonderful puzzle with which to complete my current mission.

I feel the need to close out this post with a family portrait - something I suspect that fewer than a handful of people around the world could do... 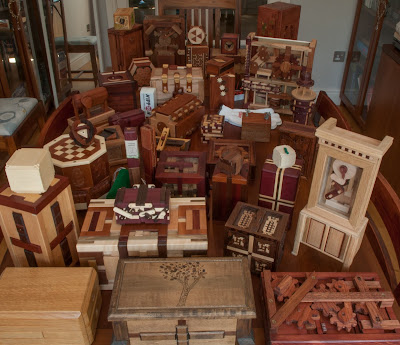