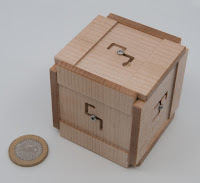 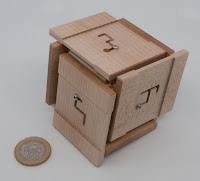 <...and I've improved the spelling of my friend's name so that he's no longer merely smoke and now happily drunk again!>
Posted by allard at 08:17 No comments: 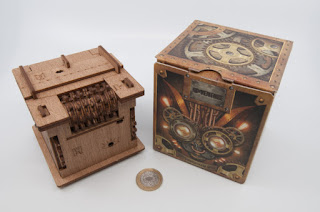 One of my puzzling mates dropped by to visit for a few days with his family and rather generously gave me a copy of this neat little “Escape Room in a Box” made by iDventure.

They’re made of many, many little pieces of laser-cut plywood, and frankly, given the amount of work that must go into making these little guys, they’re very reasonably priced. The packaging has a neat steampunk design and it makes for a nice-looking puzzle – it’s fully replayable with nothing getting destroyed along the way… or it shouldn’t be if you’re doing it right!

Faced with the locked up starting position, there are certainly lots of things worthy of inspection – several things will move, and even more of them appear to be locked up at the moment – exploring each side of the cube is interesting and rewarding and there quite a few things that appear to make no sense whatsoever. 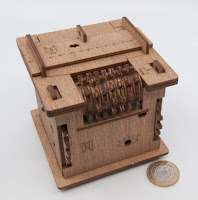 There is a proper order for solving things around the box, and there are plenty of clues to make sure that you follow things in the right order, as trying to solve them out of order results in a lot of frustration and attempts at applying lock-picking skills – don’t be that guy.

Once you’ve found an appropriate place to start the journey, you’ll find yourself faced with a series of mechanical puzzles, encoded messages and observation tests. Some things really don’t make sense until a little nugget of new information appears and all of a sardine a whole series of things will fall into place allowing you proceed to the next layer of the puzzle. 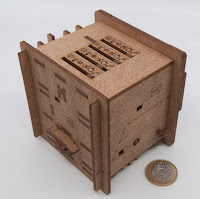 For a cute little mass-market puzzle it will definitely give people who consider themselves to be real puzzlists enough of a challenge to put a smile on their faces. Given the wider attraction of escape room games around the globe, this little guy might even help more people to find a way into our little hobby… give it a try and then pass it around to your friends. 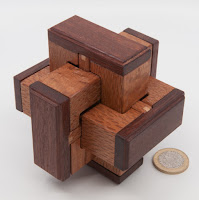 Everyone who’s read Brian’s blurb about Ages knows that it got its name from the estimated time to completion of the BurrTools analysis of the piece set he gave it to chew over – it’s not hard to imagine the poor little program looking at this problem and deciding that this is going to take entire epochs… but Brian was keen to get something interesting out of that analysis so he’s been keeping it running on an old PC for literally years, carefully harvesting the interim results along the way so that when BurrTools runs out of resources and stops in an inelegant manner, he can just restart it where he was and not go right back to the beginning of the road again.

OK, so Brian’s been working on this one for a long time… he’d decided on the design during the course of last year and had started talking about it at IPP last year, where Gill asked Sue if there was any possibility of getting a copy to me in time for my birthday at the end of September. The girls duly cooked up a sneaky plan and I was presented with a large beautifully wrapped box that housed a life-size(?) baby wombat – the Australian equivalent of the Standard Puzzle Hamster – several little collectible koalas, a copy of Ages and birthday wishes from Brian and Sue. Lucky boy, eh?

I duly took it up to the Northern Puzzle Party, managed to find the obvious first couple of moves – and then nothing! 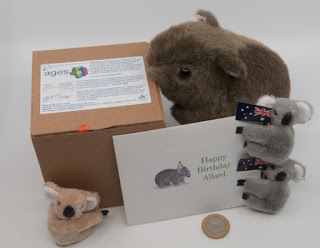 At some point Ali was playing with it – said something excitedly and ran out of the room…. And then over the course of that afternoon and evening the lads took the whole thing apart and reassembled it… presenting it back to me in its original form so that I could “enjoy” it myself…

It turned out that “enjoyment” lasted FOUR MONTHS!

For the first two months, I explored the first few moves in great detail… by which I mean I kept repeating the same things over and over again expecting something different to happen. At this point, I literally had Brian sticking his tongue out at me, over and over again…

It turns out there’s a really sneaky move right near the beginning and I needed some encouragement in order to make some progress… encouragement received, I progressed and duly found myself in some serious burr territory. I was seriously tied in knots, safe in the knowledge that “this bit” was “just” a burr… and technically it is, but it is an absolute beast of a burr – and it took me about a month to reduce it to a large pile of parts – during which time I realised I was going to need a lot of help to put this thing together again if it wasn’t going to be lying on my desk in pieces for eternity. 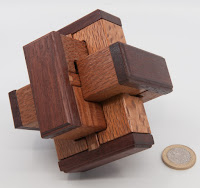 The final stage in the puzzle is to retrieve a little piece of Aussie – and I was pretty sure I knew where to look – only problem was that the things I thought I was trying to open, STRONGLY resembled a single solid lump – finding the way in was a great little final kick in the teeth from this superb puzzle.

This puzzle really is the BEAST that Brian promised in his blurb – it teased and perplexed me for four months, and I’m still dead chuffed with it – that was an awesome birthday present thanks to Gill and Sue’s conniving and Brian’s wonderfully twisted mind. Thanks to all of you!

<Unfortunately, if you’re reading this and think to yourself: I’d like a shot at that, you’re out of luck – Brian sold all 200 copies in less than the time it took me to solve this little guy – in fact he sold them all before I’d even got past the first real hurdle, and I had a head start on it! So I’m afraid you’re going to have to resort to the secondary market if you’d like a copy of this one.>
Posted by allard at 10:08 4 comments: