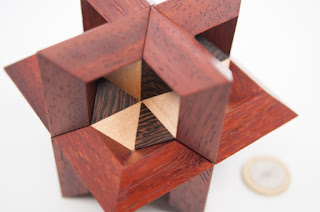 I remember this one being up for sale on Cubic Dissection way back when I first started collecting puzzles. There were a few available for sale but the newbie in me just couldn’t imagine dropping quite that much cash on a single puzzle – no matter how gorgeous it looked. (Yes, dear reader, I found it hard to imagine someone paying $300 for a puzzle. Any puzzle. Simpler times...)

Of course, at the time, I hadn’t seen any of Mike Toulouzas’ work in person, I certainly didn’t have the modest collection that I now have, and hey, inflation.

Whatever may have changed over the past 10 years or so, I always had a soft spot for this puzzle and I’ve been on the lookout for one at a reasonable price for a while now. As luck would have it a pair of them came up on a recent Haubrich auction of John Moores’ puzzles which meant that I was able to secure a copy at slightly less than the original sticker price – so I considered myself rather fortunate! 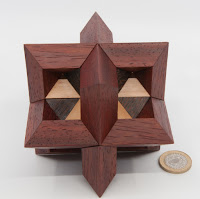 Mike only made 17 copies of Cross Windows back toward the tale end of 2009, so seeing two of them pop up on the same auction was pretty unusual. At the time he described them as a bit of a signature-piece, something that was very clearly his work… of course his signature has developed over the years and it’s now even more creative and certainly no less distinctive!

This puzzle looks great from any angle – you have three intersecting window frames with a hexagonal pattern in each corner. Of course, being a Mike T masterpiece, it comes apart on an unusual axis. And it comes apart quite quickly, most often leaving puzzlists with a small not-so-orderly pile of pieces with very little idea of which piece goes where.

Faced with six plates, your first job is to understand the interactions between the pieces, the tabs and the gaps in the patterns – convince yourself you have exactly the same number of gaps as tabs, and then set about matching up the former to the latter… realising along the way that Mike’s been a little sneaky and given you a rather unhelpful set of pieces that will only go together one way… and once you’ve found that, the actual assembly will require a fair degree of dextrocity (yes, it’s a word, damnit!), perfect alignment and choosing the correct axis because there’s literally no slop to allow a finessing into place – you have to do it right.

Chuffed to bits to have one of these from John’s collection – somehow makes it a little more special. 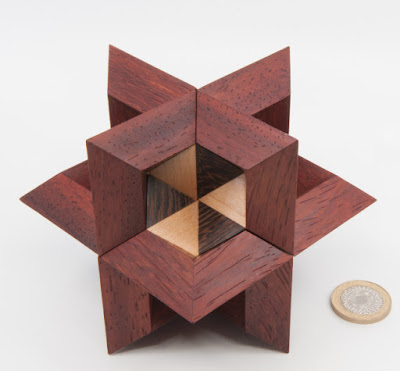