Allard’s BS - a story about JABS (and Broken Soma) 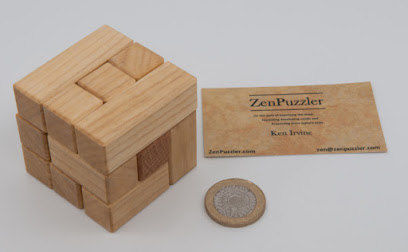 Last week a package arrived out of the blue from my mate Ken… there was a Snoopy toy in there for Gill (Thanks Helene!) and a modest pile of wooden blocks with a Zen business card and four letters scribbled on the back of it – J A B S.

Rapidly putting two and two together, I realise this is a new design from Ken and immediately throw myself into solving mode, trying to pile them up to make a cube, which seems like the obvious thing to do here – there seem to be more or less the right number of cubes for a three by three cube so I’m in there!

Several minutes later, having got nowhere near making a cube at all, I pause for thought and decide to check the number of cubes… and half-cubes – for this is one of those deviant designs that starts out with some recognisable Soma pieces and then splits one of them into several little half-cubies and distributes them around the other pieces in a pretty haphazard way… well it looks haphazard, but I’ve come to learn from Ken’s designs that they’re anything but! 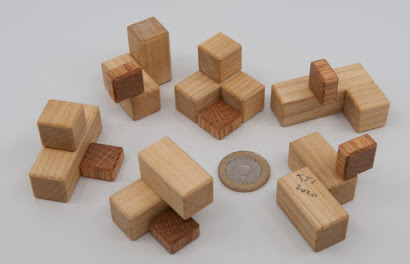 OK – I can confirm that there are indeed the equivalent of 27 cubes among the pieces – so we should be good to aim for a cube, remembering that several of Ken’s design aren’t actually cubes and this one didn’t arrive with any instructions telling me to make a cube – you can’t be too careful!

Settling down into something resembling a more thoughtful approach to puzzling I start experimenting with some piece placement and after a little experimentation I manage to find a couple of very-nearly-solutions – one of which starts me down an interesting theoretical path and after hitting one more dead end, a little adjustment yields a perfect cube – complete with theory turning out to be spot-on… I love it when a plan comes together - cue cigar-smoking colonel.

After I’d solved it, I enthused a little (OK, quite a lot!) at Ken and he mentioned he’d come up with this design when he was working on Broken Soma – so this one become JABS – Just Another Broken Soma – because he wasn’t quite as excited about this one as Broken Soma. I asked if a particular variant might be possible and a very short while later, he shipped over a BurrTools files with what he called Allard’s BS – suggesting it would make a good blog title – so it has! That puzzle looked interesting too and has a couple of “features” intended to make life hard for puzzlers … no idea if it’ll actually be any fun as a puzzle though.

JABS is another really enjoyable puzzle from Ken which he told me that Brian at Wood Wonders would probably be making in the near future – unfortunately I was a little slow in publishing this blog post and that's already come, but not quite gone! There are a few left for sale over here.

…all of which gets me to the point where I’m writing up this blog post and I want to put in a link to my blog post about Broken Soma – Ken’s selection as his best Broken Soma puzzle that made a big splash at the 2019 Rochester Puzzle Picnic. It was an excellent puzzle and I’m thoroughly embarrassed that I didn’t devote a blog post to it… I meant to – I even said as much when I mentioned handing it around at last year’s Northern Puzzle Party and tormenting many puzzlers with it – and yet somehow, I did not. That must be rectified now!

Kevin mentioned that I’d been torturing people with it at MPP’s last year too when he wrote about getting a copy of it from Brian over here. 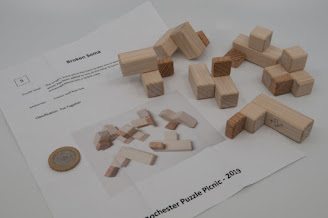 The conceit of Broken Soma is simple: Ken has taken the small L-piece from a Soma cube and split each cubie in half and then spread those bits across the other pieces, and then asks you to build a 3*3*3 cube from the pieces.

Sure Ken – that sounds simple.

Many puzzlers have discovered this as they’ve tried, like me to simply put the pieces together and build up a cube… in fact I’m not ashamed to say that I’ve taken a fair amount of pleasure over several months watching a number of well-seasoned puzzlers struggle with this one – you can see why this was Ken’s favourite in that style – it is thoroughly evil! 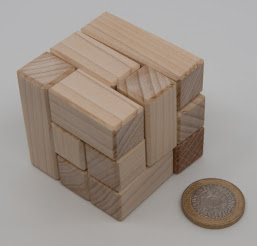 Having said all those nasty things about it, it is a thoroughly good puzzle if you think about it – there are a couple of things that you can deduce form fiddling around with the pieces, and armed with that information you can actually come up with a bit of a strategy that will significantly reduce the amount of legwork required to find a nice, neat construction that satisfies every constraint – yours and Ken’s.

I reckon that just plain old BS is definitely the king of the castle, but JABS makes a pretty good prince!

Thanks Ken – for both of them!!