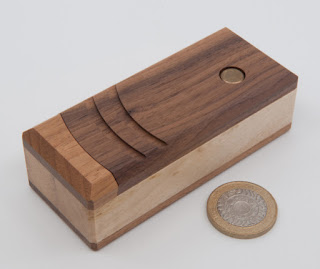 Junichi Yananose has designed many fearsomely tough puzzles over the past decade. He’s mastered orthogonal board burrs and taken them to extremes. He’s produced some wonderfully non-orthogonal structures that can reduce grown men to tears. And he’s designed and produced some of the very best sequential discovery puzzles out there… so when he announced the release of his Coin Case and described it as the simplest puzzle box he’s ever designed, I was intrigued.

I joined the slightly disorderly queue when it was released and managed to get my order in after things calmed down a little (there was quite a lot of anticipation so the web-store got somewhat hammered and couldn’t handle it elegantly) and waited patiently for the little box to wend its way over to Blighty.

Juno’s done a lovely job of making it look smashing, with a nice selection of woods giving you lots of visual clues to examine. At first glance it looks a little like an oversized version of the Psycho Matchboxes of old, and that may well point you in a particular direction – which might not be useful! 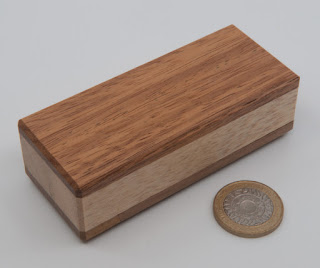 There aren’t a lot of “steps” to opening this box, but it has an interesting twist on an old idea that will make it interesting for puzzlers, while at the same time not making it too hard for muggles to crack without getting frustrated and losing interest. The mechanism is pretty robust and it’s definitely one that you’ll feel very comfortable handing around to folks who don’t necessarily appreciate the finer things about carefully crafted mechanical puzzles – and that’s not to say this one isn’t very well-crafted – just that its also been designed with enthusiastic and potentially inexperienced solvers in mind.
Definitely one to have handy for sharing with people who haven’t yet been hooked by the lure of solving mechanical puzzles… and there’s still a bunch of them available over at Pluredro.
Posted by allard at 11:16