This one stood out for me from the latest Pelikan Workshop update.

From the ever fruitful (and somewhat devious) mind of Volker Latussek, we get Akku – the now familiar slightly lipped acacia box now comes with nine V-shaped maple pieces to be placed inside said-box, below said lips. Simples! 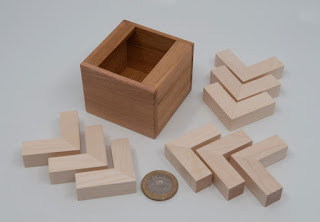 If you’re wondering about the name, akku is short for the German word for a battery, and you’re trying to put 9 V’s into a box – or make up a 9V battery – cute!

As you’d expect from the Pelikan-folks, this puzzle has excellent tolerances – put things in squarely and they slide neatly into place – try any unintended rotation or get things a bit squiffy and they’ll jam up on you nicely… don’t do it! The pieces and the box are pretty much rock-solid – which is super-helpful as I discovered!

The lips on the sides of the opening are about two thirds of a unit wide, which means there’s plenty of space to insert two pieces next to one another, but three won’t fit through at the same time… and there are nine V's to get in there…

Time to strategize – think about what needs to happen right at the end – what would things need to look like for that to happen and how you could possibly get to that point in the middle.

I spent quite a while working on that, and then trying increasingly adventurous ways of getting things to happen, and at some point I made what I came to think was probably a fatal error – I pushed a piece a little too hard and found it clicked neatly into the spot that I wanted it in… only I couldn’t get it out of there… cue mild panic, visions of having to break a piece or one of the lips off, or even worse.

I spent quite a while trying to “encourage” (my favourite new puzzling descriptor!) the pieces out of the box and realised I was getting absolutely nowhere… realising that pushing things in is a lot easier than trying to pull them out, this teaches us all a great lesson, folks – don’t use (ANY) force!

Now if the universe was a fair place, I’d be gubbed right now and I would actually need to break something in order to get back on the ole puzzling trail – fortunately for me, the universe decided that it was my lucky day and it smiled briefly upon me… and as I was idly fiddling around with the pieces now well-and-truly trapped inside the box I noticed I could change the arrangement subtly, which opened up some new moves and I found I was able to extract them rather neatly, with no force whatsoever.

Retracing those steps put the pieces back into the box with zero force and actually had them exactly where I wanted them for the final few moves I was hoping would be possible, et voila. Solved!

Now let me state for the record that I did not deserve to solve it. I did a stupid thing and instead of the universe punishing me for it as it normally does, it smiled gently on me and showed me the way. It showed me some really interesting piece moves that I probably wouldn’t have thought to try if I hadn’t found myself in a totally impossible situation – they’re really interesting and make use of all of the space that you have.

Nine simple pieces to pack into a box with virtually no restrictions whatsoever – yet it’s a lovely challenge that rewards some Think(c)ing – what’s not to like?

…now I’m off to buy a lottery ticket in the hopes that the universe is still smiling on me.