With the world still either firmly in the grips of a global pandemic or beginning to emerge from one, depending on where you currently find yourself, there was zero chance of holding a physical meet-up, so last weekend we hosted our fourth Virtual Midlands Puzzle Party – an opportunity for friends from around the world to have a chat about puzzles and enjoy a few hours together.

Some elements of the established routine for VMPPs remained – we still had three two-hour sessions over the course of the day to allow folks from around the world to join in for at least some of the day without having to get up in the middle of the night – but we decided to flip the program around a bit so that folks who weren’t able to join the evening session could be subjected to enjoy our infamous Pu(b)zzle quiz and the evening folks could have some gentle chit-chat about puzzles they’re currently enjoying. 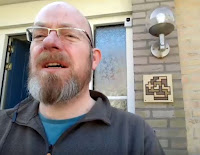 We kicked off the first session at 10am and it didn’t take long for us to have about 25 puzzlers from around the world – including a few from the US and Canada – in spite of the fact that it was quite literally stupid o’clock over there. Tyler, Robert and Ken were surprisingly spritely given that most mortals are fast asleep at 4 or 5 in the morning!

First order of the day was a guided tour of Michel’s new puzzle cave. Having recently moved into his new home (across the street from the old one) he's been able to set up a dedicated puzzle cave and was keen to show us around. The tour started out front with a view of his old house and the massive trek of probably 20 metres he’d undertaken to move house – and a quick peek at the pentomino house number designed by George and printed by Oskar. A quick stop in the living room showed Michel’s favoured puzzling spot, complete with several partially solved puzzles, before heading off into the puzzle cave itself.

Michel gave us a nicely-paced tour of his various puzzle cabinets and sets of map drawers showing how various bits of his collection are organised either according to designer (there’s a BIG selection of Oskar’s in there) or type (similarly, Michel’s clearly a massive fan of n-ary puzzles – he has four copies of the Hexadecimal puzzle) or maker (there’s a serious collection of Thinkfun puzzles!).

One thing that caught my eye was a number of cast concrete puzzles (cubes, burrs and assembly puzzles) by Albert Meijer that looked really striking – Michel says the pieces might be a bit brittle so best played with carefully, but they look really unusual.

After the tour and the inevitable Q&A we saw the return of Frank’s ever-popular (well that’s what Frank says) Pu(b)zzle quiz – this time with even more puzzle puzzles, including an anagram round that brought us the delights of BILE CUTTLER and TOMBOY SWANKERS and a maze round that had us doing mental arithmetic badly along the way… and in the end seeing our resident maths teacher Mike taking the laurels.

After the quiz Tomas treated us to an impromptu tour of his shop and a bit of a chat about how a small town in Finland can support one of the only dedicated puzzle shops in the world. (Spoiler: the internet helps a bit.) There were comments about the seemingly unobtainable copies of things like Popplocks just sitting there on his shelves waiting for a puzzler to take them off his hands… and then he brought out some classic Strijbos puzzles that have been selling for silly money in auctions over the past few years all currently in stock at Sloyd.fi.

The morning session ended with what looked like Ali’s house on fire – except it wasn’t – he was barbecuing for the handful of puzzlers that had gathered – well-distanced – in his back yard to enjoy our VMPP together… I’m sure I wasn’t the only one who was highly jealous of the lads’ BBQ!

The afternoon session started with some chatter about the pandemic and vaccines, with Pantazis telling us of an as-yet undocumented side effect of the vaccine: he’d developed a liking for physics! Pantazis also did a fabulous job of generating interest in visiting Kastellerizo, offering his services as the island’s only official guide in case the lure of visiting one of the few puzzle museums in the world wasn’t enough. There was a bit of chat around 3D printing and that’s probably identified a need for a future session on different perspectives in 3D printing puzzles – which seems to be getter ever more accessible.

Jane Kostick was the main attraction for the afternoon session. She started with a talk on the relationships between John’s stars and her various wooden designs – showing how each is effectively a model of the other, even though they look totally different. Jane has a wonderful knack of making the geometry of the different designs all make perfect sense and I love the way she can explain the relationships between them and actually show you how each relates to the other.

She spent a while showing us how the stars are assembled from individual wires in a wooden jig – showing us all of the different symmetries along the way and describing the different jigs she uses. She made it all sound wonderfully straight-forward but if my experience of trying to assemble them in her living room a few years ago was anything to go by, that level of expertise comes from a lot of practice!

After the theory, she took us down into the basement to show us how she cuts the wires for the stars and then gave us a live demonstration of solderwelding the ends of the stars – definitely the most dangerous demo we’ve ever had at an MPP – Jane wrestling with an oxy-acetylene torch while chatting to us on a precariously perched iPhone with just a pair of sunglasses for protection. (Thankfully no iPhones or craftsmen were harmed in the making of that video!)

After the solderwelding demo, she showed us a bit of the finishing process for the stars, starting with a barrel of wonderfully dangerous looking (there’s definitely a theme here! :-) ) acid. Then there was a bit of multi-stage polishing before the final product is packaged up ready for shipping around the world. 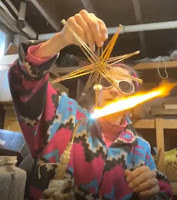 From there Jane took us into her workshop out back and talked us through her process from big boards down to little sticks, including whipping up a quick perfectly dimensioned stick with several jigs along the way to get the angles and lengths exactly as she wants them. There’s a huge collection of jigs on a shelf set up to do a couple of things each, very precisely. Something I found interesting was the fact that Jane also uses some of the Byrnes Model Machines for a number of the stages in her process – something she shares with Brian Menold.

There was a demo of the press fitting of the magnets she uses and a bit of a chat about the need for microscopically different drill sizes depending on the type of wood she’s fitting the magnets into in order to get a strong enough grip without splitting the wood in the process. There’s clearly a lot of experience going on in there… 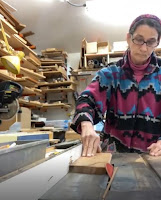 During the walk around the woodshop Jane was keen to point out the wood from friends’ trees and from her own yard that she’s been curing so that she can incorporate it in a future project – making something beautiful out of something special.

I really enjoyed seeing Jane talking so animatedly about the classes she runs for kindergarten children to teach them about some of the more interesting shapes she uses in her designs, getting them to make up moulds with magnetic assemblies and the fill them with plasticene to see what the internal shapes are.

The evening session was literally just a couple of hours for us to chat about puzzles and puzzling. Everyone took a turn to tell us what they’d been puzzling on recently and anything that they particularly recommended. I got a fair amount of stick over the fact that I’d made zero progress on Jack’s Tippernary Mystery Tour. Meanwhile Goetz was raving about it…

Tyler didn’t have any new puzzles to tell us about, but was quite excited at the prospect of having just ordered a couple of Byrnes Model Machines so there should be a steady supply of new puzzles in his future once he gets those dialled in nicely.

Marc admitted to being stuck on Space Case, but wasn’t ready to accept any assistance yet so he just received a bit of sympathy. Tamsin was enjoying Blinded II and Louis was keen to sing the praises of Akaki’s baskets. Frank proudly announced that he’d managed to return Geneva back to a pile of separated pieces – something he’d been struggling to do over the past few weeks – we’d been “encouraging” him on our weekly games night chats.

Haym couldn’t say enough good things about Chiral 2+2 – one that I need to spend some more time on – I cannot come close to seeing how the heck I can weedle a fourth piece into that frame…. Ali also admitted to really enjoying both Akaki’s Baskets and getting to grips with a recent print of Stewart Coffin’s Slot Machine – another cracking puzzle. Michael showed us some early results of his experimentation with Altekruse pieces – I like the fact that he’s doing his experimenting in the real world rather than in BurrTools – proper old school analysis.

Toward the end of the session we had a bit of a philosophical discussion about our VMPPs and their future – I mused that we’ve been on a bit of a journey since the first one when we tried to cram as much puzzling into the three sessions as we could, and then over the next few we almost stepped back from that a bit, and it seems that folks still enjoy them just as much – and selfishly there’s a lot less pressure on the organisers to find stuff to fill the sessions – it seems that puzzlers really appreciate the opportunity just to hang out with their friends and chat… and while in the UK we might be starting to imagine that we might be able to come fully out of lockdown around the middle of the year, there might still be a place for these VMPPs from time to time – it seems there’s still a bit of a demand for them so we’ll need to make a plan for something more permanent I suspect.

A massive thank you to Michel, Frank, Tomas, Jane who helped make this a brilliant day with our puzzling mates.

For anyone who wants to see recordings of the sessions, they're available on Youtube over here: