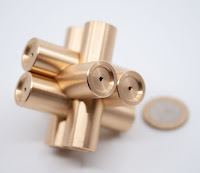 A couple of weeks ago I was fortunate to be given a prototype copy of Brass Monkey Four in a little care package from Ali and Steve (along with a whole bunch of 3D printed puzzling goodness – but that’s another blog altogether!).

The lads were pretty sure they had it all sussed and they were keen to inflict it on a tame puzzler, so I got to have an early play with it.

This one looks more or less just like all of the others in the series – look closely at the ends and you can tell them apart, but a casual glance might let you think there were a bunch of identical puzzles on the shelf…

The first one was a pretty standard burr – just nice and big and heavy. Number Two was different. Number Three, it turned out, could bite and grew a bit of a reputation for requiring a little respect – definitely the mark of a good puzzle. 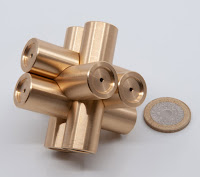 …and Number Four – well, let’s just say that we left plain old burrs behind a long time ago! This one has a delightful subtlety that may well elude the most motivated of puzzlers for quite a while – but when you do find the first little figurative thread to start tugging gently on, it provides the loveliest of “A-Ha!” moments…

…but the smiles keep growing as you wander through the solution, for wander you must – and if you aren’t smiling broadly by the time you solve this puzzle, there’s most certainly something wrong with you.

The lads have put something special into this puzzle, and then disguised it to look just like all the other puzzles in the series so far… that takes a holy trinity of cunning and craftsmanship and fine engineering.

This one’s definitely my favourite in the series – there’s enough challenge to feel that you’ve earned the solution, but not so much that you feel you want it all over and done with – this is one you want to savour and solve and re-solve… it’s excellent!

After I’d solved it the lads pointed something out to me on the prototype that seriously wouldn’t have bothered 99.9% of the puzzlers out there, but the lads are perfectionists, so they were tweaking the design again to make sure it was absolutely rock solid in anyone’s hands… and now it’s ready for everyone – over here.

You will thank me.