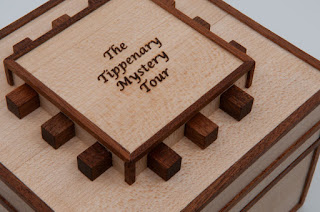 A few years ago Jack Krijnen created a truly awesome sequential discovery puzzle in the shape of Jack-in-the-Box - I was a huge fan, so the when I picked up on the merest suggestion that he might just be working on another puzzle box, I made sure my he knew I was dead keen!

A few weeks ago I got the email to let me know that it was ready and a few days later I was opening the packaging and looking forward to another puzzling journey into the unknown. It’s a really handsome maple box with some very neat mahogany trim – name proudly laser-etched in the centre and some inviting-looking rods teasing you on the top of the box… and they seem to be repeated around the base of the box, but those ones seems even less keen to move than the ones on the top.

I spent quite a while trying to get into the box at first… I outed myself at our last VMPP for the fact that I’d made virtually no progress whatsoever in the first couple of weeks – some sympathised and told me the first set of locks was quite tricky… Jack just smiled and looked like the proud puzzle-maker he ought to be.  A few days after that Nigel got in touch and I shared what I’d ben doing and he seemed puzzled at my lack of progress as he reckoned another possibility should be “available” at that stage – only it wasn’t – and I’d been exploring some seriously wild and whacky ideas of what I might need to do next: I’d heard something occasionally moving around inside and I’d convinced myself that that sound, and the name were a suggestion that there was a hidden n-ary mechanism inside that needed blind manipulation, so I was trying to make that work… (Yup, that’s how far down the rabbit hole I’d gone…)

Nigel kindly encouraged me to try something that I’d tried may times before with no success, and so I kept going until I finally found the merest trace of a hint of the tiniest bit of movement – so I doubled down and even though my hands hurt, I executed that move… and it was lovely – but I hadn’t expected what came next at all… 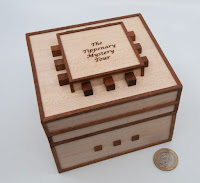 The next puzzle took me ages of proper pen-and-paper puzzling to try and come up with a strategy for solving it… and then the penny dropped and I found the link I’d been missing, and I had to smile at Jack’s lovely sense of whimsy – I really LOVE that second puzzle!

…and of course there was – finally finding what I’d been expecting to make an appearance since the very beginning of my long journey – like seeing an old friend after being in lock-down – it was nestled there waiting for me… only it wasn’t – it was an imposter – well disguised, but an imposter nevertheless – yet far from feeling cheated, this actually provided another new adventure…

This one really keeps on giving – when you think you’re finished, this one keeps on giving and giving until you finally find Jack’s Extra Challenge – complete that one and you can call this puzzle properly solved.

Once again, I find myself writing about a puzzling journey where I can’t talk about the steps along the way as each one is such a wonderful surprise that I’d hate to rob anyone of the sheer joy of discovering each new layer beneath as you gently unwrap this puzzling onion… this one really surprises you a number of times as you work through to the final challenge – I can’t think of another puzzle that does it as beautifully and as plentifully.

[After I’d finished wending my way through it the first time, I contacted Jack about the stiffness that we discovered had resulted from some super-unseasonal low humidity in the UK – definitely not the sort of thing I’d ever expected or experienced in the past – lack of humidity or precipitation is not something we’re known for in the UK! Jack insisted on fettling it for free and the first lock is now silky smooth and ready for visiting puzzlers to enjoy to the full – thank you, Jack!]