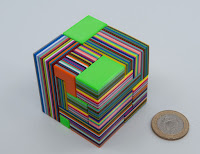 One of the really great things about almost sharing a birthday with another puzzler is that you have a brilliant excuse to do puzzling stuff about the same time every year… and so it is that we’ve come to gather oop north at Frank’s for a Northern Puzzle Party at the end of September / start of October each year.

A few weeks back was the designated weekend so a bunch of us trekked north, and some locals rocked up, and Louis and Wil joined us from The Netherlands… our first actual in-person puzzle party in absolute blimming ages… it would be a massive understatement to say that I was looking forward to it!

I was one of the last to arrive – the Dutch crew had flown in the day before and pretty much everyone else had clearly left earlier than I did to get there and get some puzzling on… when I arrived Frank began plying me with caffeine and I set about saying hello to folks I literally haven’t seen in person for more than a year and a half – saying hello and shaking a hand felt reassuringly normal… it didn’t take long to fall into our old habits of handing out puzzles we thought people might enjoy and then “encouraging” (or more accurately: goading) them into solving it. Oh, and there might have been a bit of banter around as well…

Ali and Steve gave Frank and I each a 3D printed Happiness cube #27 – on the grounds that together it produced our age… Steve explained that whenever they order their filament they always get a small sample of some other colours and they’ve been storing up these samples for a while now and that’s what they’d used to print our splendidly colourful Cubes of Happiness – so it hadn’t actually cost them anything… however I suspect that rather discounts the many hours of endlessly swapping filaments they (Ali?) must have gone through… in the end I think there might be a shed-load of effort that went into producing those cubes… thanks guys! I really appreciate the care and effort that went into that!

They also gave both of us an airhorn… it’s a long story. :-) 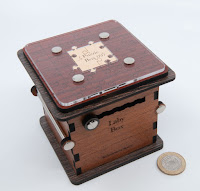 Louis gave me a copy of Siebenstein’s Laby Box – a cube-ish box with four sliders around the edges and a central core with four mazes for the sliders to navigate through… only the mazes themselves are hidden inside the box until you start to extract the central core. Some strategy is helpful here or you’ll find yourself having to retrace large portions of your steps, which can be tiresome.

I’d taken the set of Holonomy Mazes along in case someone was interested in having a whizz around them… Steve spent a while pretending he couldn’t solve them and then did – just like that! 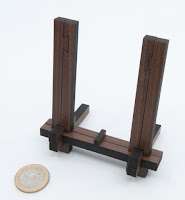 Frank gave me a copy of a Kumiki easel that our friend Lixy has commissioned – it’s a really neat little construction that’s just the right size to display a bunch of the Asobidea puzzling postcards. The pieces are neatly machined and they go together beautifully, holding together rather nicely and forming a reasonably serviceable little display easel.

Lunch was a massive affair, dwarfed only, as it turned out, by dinner, as Jo had laid on an incredible spread for us… 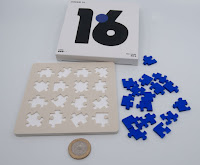 Ethel had brought over several crates of puzzles for re-homing and several of us had a good old rake through them to find some new treasures. Amy picked out quite a few lovely little puzzles and I managed to buy a copy of Stew Coffin’s Grizzly Burr which I’d been after for a little while now. The best bits from those crates will soon be finding their way to a puzzle auction site near you, courtesy of Steve… good man! 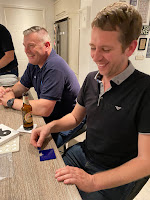 Mike had a bash at Jigsaw 16 – not bothering with the stated goal of “merely” putting the sixteen jigsaw pieces into the frame – he opted for the potential challenge of assembling a complete square of those pieces even though none of us knew if it was even possible… and he spent quite a while coming up with almost-solutions, but persevered until he had produced a perfect little blue square, impressing all those around him… now we know it’s possible – not easy, but possible!

I’d taken my copy of Kamei’s Hot Miso Soup along in the hope of getting “someone” to open it for me… I’d had it open once or twice, but latterly I couldn’t get one of the early moves to work properly so I reckoned one of the box-savants would get it opened for me in no time. Sadly both Louis and Oli gave it back to me solidly locked and we decided it would probably need to go on a little trip for some repairs… and then when I got home the weirdest thing happened – I opened it! I suspect that the general encouragement the lads had given it over the weekend had somehow loosened it up to the extent that when I gave it one last try before sending it off to Japan, it magically opened… consistently – so thanks chaps!

Wil put me out of my misery on Lutz – I’d been struggling for ages and I’d quite literally convinced myself this one really was impossible… only for Wil to show me it wasn't… he’s a pretty decent puzzlist is Wil!

Several of us stayed over at Frank’s while some spent the night in a local Airbnb. Frank was up bright and early and cooked us all blueberry pancakes with his own fair hands… serious treat! After breakfast we tidied up all of our puzzles and popped everything back in the cars and then headed off to Preston for a couple of actual in-person escape rooms – again, something most of us haven’t done in eighteen months. In spite of our lack of match-fitness both teams managed to escape their respective rooms with plenty of time to spare… we celebrated with some leftover sandwiches from the day before (still delicious!) before we headed off down the motorways to various points south, with my sat-nav seriously earning it’s keep routing me off the main motorways a couple of times to skip over some serious snarl-ups.

Thanks Frank (and Jo!) for a brilliant weekend – and happy birthday mate!