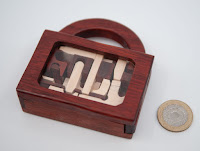 Several weeks back at our last Virtual MPP, Peter Hajek told us about a new puzzle lock from Dick Hensel called the Window Lock. Peter had been chatting with Dick  through some of its development and wanted us all to know that Dick would shortly be ready to begin selling them if any of us were interested.

He gave us all Dick’s contact details and encouraged us to reach out, so shortly after the session ended, reach out, I did… and a couple of weeks later I had a copy of Dick’s latest wooden creation in my grubby paws.

Window Lock is about the same size as his previous puzzle locks, but this one really stands out for it’s deep red (padauk?) colouring and the fact that there’s a large window covering the front of the lock. Seems kinda generous, almost -putting all of the gubbins inside on fairly clear display… and yet in spite of that, it’s a really fun puzzle!

The window gives you a clear view of what’s stopping the shackle from opening, and you can see what’s blocking that in turn... A little manipulation will get things to begin moving and then it gets interesting, because there’s no apparent way to do what you want to do… and there are some spare bits and pieces inside that lock that don’t appear to perform any useful function… 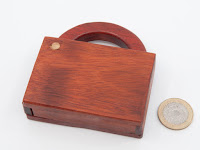 That’s where your puzzling fun begins – you’ll need to work out how to use all those things together, and what order to do things in in order to finally release the shackle.

I found myself going round and round several times before I really had a clear picture of what I needed to do.

It’s a delightful sequence that literally uses every single little feature inside that lock – take my advice, don’t be too eager to jump to the end because I guarantee you’ll miss something along the way and be forced to go backwards…