After I bought a few things from Bernhard Schweitzer at the Dutch Cube Day, he gave me a freebie copy of his IPP 22 Exchange puzzle called Stuffing. Within a couple of weeks of that, I spotted a copy for sale on Nick Baxter’s auction – weird how that happens so often, you’re not aware of a particular puzzle, stumble across it and then see it popping up all over the place? That copy eventually sold for $70 against an estimated value of $30 at the start. And as if to prove my point for me, a couple of weeks after that, a copy of Stuffing II, Bernhard’s IPP 23 Exchange puzzle, was sold on Phase 6 of Jacques Haubrich’s puzzle auction. 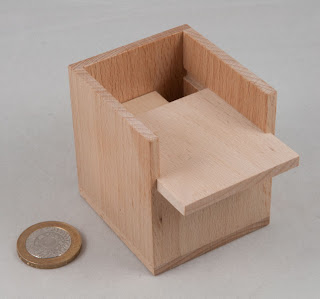 Stuffing was designed by Liu Suzuki and manufactured by master-craftsman, Josef Pelikan. It’s a simple-looking 3D packing puzzle where the object is to place all of the pieces inside the box so that the lid can be properly closed. When first presented with the puzzle, one of the pieces is resting on top of the box, and Bernhard says “Sorry, I forgot to put that piece inside the box – just pack them all in the box” with a wicked glint in his eye. He’s left not only the longest piece out, but he’s placed the other in the box in such a manner that it actually looks pretty full already – nice guy, our Bernhard!

There are four oddly shaped pieces and a single cubie in a contrasting colour – and one of the constraints of the solution is that the coloured cubie needs to be in a corner. The other four pieces are made up of three or four cubies that are all 15x20x20mm in size (OK, so they’re not really cubes!) – but the odd dimension on one axis along with the unusual way that the cubies have been joined to form the pieces, makes them quite disorientating. (OK, OK, I’m easily confused!) 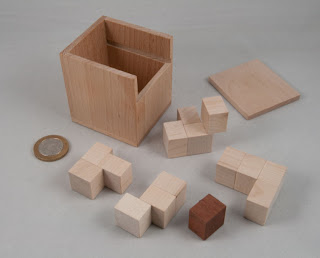 Start by noticing that that box isn’t a cube – not even close to being a cube! That means that orientation inside the box is going to be important, and you’ll have to experiment with different orientations before you can eliminate any particular combinations of pieces... Gee, thanks Bernhard!

Predictably I just piled in and picked an arbitrary corner, rammed the coloured cubie into the corner and then started experimenting. It kept me quiet for a while in my hotel room that evening (between the close of DCD day one and meeting the guys for dinner) – but I managed to stumble across a solution and probably saved myself a lot of pain in the process – it’s a bit Coffin-esque inasmuch and there’s a lot of space around the pieces – but not where you’d expect it, which makes the solution look quite inefficient, and yet the shapes of the pieces make that a requirement … really fun little puzzle and it’s definitely worth looking out for one to play with.

Thanks Bernhard!
Posted by allard at 17:23