Over the past year quite a few folks have presented me with various bits and bobs and I’ve commented on some of them in past blog entries already, but there are a bunch that I haven’t already mentioned and I really would like to – so here’s my way of saying thanks: 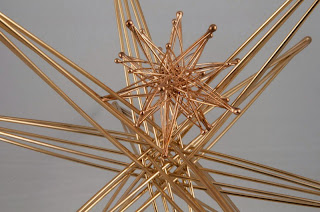 A couple of months ago I had an email from Jane Kostick to say that they’d sent a few of their bronze stars across to an English magazine for a photo shoot and when they were due to be returned she’d requested that they be redirected to me. A few days later I received the package. Jane refused to accept anything for any of the stars and asked me to accept them as thanks for saying some nice things about her work – so I got a 14” bronze six-axis star for my collection – the picture above shows my previous sixteen axis star nestling in the arms of this new monster ... Thanks Jane and John Kostick.

Wil Strijbos has a habit of tossing little extras into my orders every now and then. One of the really cute extras was a copy of “Der Mond” (or “The Moon”) – it’s a little tray puzzle in the shape of a crescent moon, but the pieces are cut in such a way that they can also be used to form a cross – which is pretty cool as in the one shape all of the outside edges are curved and in the other, they’re all straight – quite clever ... it’s one of those sort of dissections that you imagine has been around for ages and I expected to find it in Hoffmann’s, but didn’t ... Thanks Wil.
Ages ago Nigel was showing me a copy of his Pentangle Vertigo burr – if memory serves we were in the coffee shop at my office – I’d got one or two pieces out and decided to stop there as the shapes were a little unusual and I didn’t want to embarrass myself totally among all my colleagues. A while later he presented me with a copy, because he knew I still didn’t have one and he thought I’d enjoy it ... nice bloke, eh? Cheers mate.

Out of the blue I get a package in the post – and (believe it or not!) I wasn’t actually expecting anything at the time – opening the package there’s a copy of Laurie Brokenshire’s exchange puzzle from IPP31 called Bi-CycLe and a short note from my puzzling mate Ali as a small token of appreciation for hosting MPPs and such – rather kind of him I thought, and it is a cracking little Vinco puzzle. You start out with a pair of ungainly identical bits, each consisting of a sort  of L-shape protruding through a triangle, and you’re told to make a stable solid with 5 planes of symmetry – with no idea of what that shape might look like ... spending some time with them and experimenting produces a rather amazing little A-HA! moment when the pieces interlock properly and produce a very regular, stable object with the required symmetrical planes – a lovely little surprise! Thanks Ali!

When we visited James Dalgety’s puzzle museum, James gave each of us one of his recent IPP Exchange Puzzles and I was lucky enough to get a copy of Mind the Gap, his exchange puzzle from 2008. 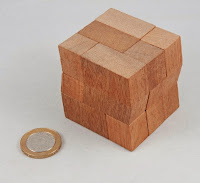 Mind the Gap was a Stewart Coffin design that he didn’t seem to think much of, in fact James recalls him dismissing it with the phrase “It’s just a load of junk!” – actually IMHO it’s a rather neat little puzzle. It consists of a 3*3*3 (sort-of) cube – except that it has waves along two axes – giving you a darn confusing puzzle – you have 9 L-shaped pieces to make up this cube and the only instruction is that there shouldn’t be any internal voids - hence the name, geddit? You’ll soon realise that the angles in the different axes aren’t quite the same – and that results in a nice challenge – I think it’s anything but a load of junk, but who am I to disagree with arguably one of the greatest puzzle designers ever?
A while back I obtained a couple of monster burrs that came via a slightly circuitous route from the guys who were in the process of setting up a web shop selling (of all things) fine wooden puzzles – particularly unusual and higher order burrs. The web shop is now up and running successfully as Arteludes (crank up Google translate if your French is as rubbish as mine!) and carries some rather unusual burrs –many (if not all) of them handmade by Maurice Vigouroux – and I’ve already told you that I think his work is smashing! Anyhow, those nice folks tossed in a 6-wood copy of their little Diagonal Star for no apparent reason – thanks Guillaume! 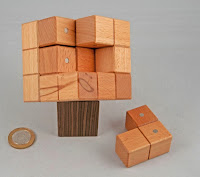 I’ve mentioned my mate Louis from Eindhoven a few times already on this blog. Now Louis has an uncanny knack for finding puzzle bargains on eBay, but every now and then his knack comes up against an unwillingness to ship anywhere outside of the UK, and when that happens, he sometimes gets things shipped to my place and then either picks them up on his next visit or I post them over. In the last batch of puzzles there was a Magna Cube, which should have struck me as odd because there’s already one in Louis’ puzzle cabinet back home, so when he arrived on his last visit, he promptly gave it to me as a thank you for putting him up for the weekend – as he knew I didn’t have one and thought I’d like one – what a gent! Magna Cube is a fairly simple looking 3*3*3 cube consisting of 8 pieces – three of them are made up of 4 cubies and then there are five elbow-shaped 3-cubies, except, as you might expect from the name, each piece has magnets strategically placed around them so that there is only one correct assembly that has all of the magnets attracting one another so that the cube can stand supported by a corner on its stand. (This one took me far longer than it should have for such a relatively simple puzzle...) 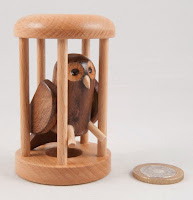 Last weekend I went down to London to attend Peter Hajek’s end-of-year puzzle party, or EPP (don’t worry, I’ll be writing about that in due course!) and a couple of folks insisted on giving me more puzzles. The first of them was Wil Strijbos who was in town visiting Peter and attending the EPP. Wil was furiously apologetic because he’d put a Christmas gift into the packages he’d sent to a couple of my puzzling mates when we all placed our most recent round of orders, but he’d forgotten to put one in mine, so here was something to make up for that – instead of a canary in a cage, he presented me with an Owl in a Cage. I guess this should be classed as a simple hedgehog puzzle, but I swear that the cage seems smaller and the bird seems larger than the others I’ve seen – great example of the genre and some nice detailing on the bird – thanks Wil! [Wil also gave me another gift – a Prague Special Edition – but I’m intending to write about that one on it’s own ... you’ll see why...]

Tim Rowett (he of Grand Illusions fame) was wandering around dishing out all manner of Christmas fare including some humorous postcards, copies of his latest catalogue and free puzzles including a copy of the Elusive E puzzle and Four times Four Equals Twenty – a design by one James Dalgety. I’ve already written at length about the entertainment that the Elusive E has provided us in the past so I won’t bore you with all that again, but the other puzzle is a great little poser! You’re provided with four triangles in four different colours and instructed to build a stable icosahedron and you’re helpfully even given a picture of one – there are two challenges, with the second involving a colour matching challenge thrown in for good measure ... of course it’s not just going to be a simple construction challenge, and you’ve hopefully already worked out why that is...

When I got home from London the next morning there was a parcel on the doorstep from another of my puzzling friends, Bruce ... he’d recently received an order from Bernhard Schweitzer and he’d bought a couple of copies of Willem van der Poel’s IPP24 Exchange Puzzle, The Grandfather of 6*6*6, one of which he’d sent to me as a gift. Willem van der Poel had designed the first 6*6*6 burr back in 1954 in his head and then used this exchange puzzle as a means of celebrating its 50th anniversary and telling a bit of the story behind it. As burrs go, it’s small – but nicely made and rather historical – thanks Bruce, I love it! 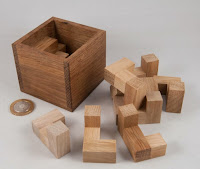 Also in that box was a copy of Ronald Kint-Bruynseels’ packing puzzle called Gregory Pack as a gift from Bernhard himself. I’d spotted this series of very cleverly named packing puzzles on Ishino’s site a while back. [Some of the others are Al Packino, Lauren Packall, Kim Nopack, Pack Nicholson and Sam Packinpah.] Gregory Pack consists of a box with two 2 cubie obstructions and 12 angled 5-cubie pieces, 10 of which are left-handed and the other 2 are right-handed. Seems simple enough, but I can vouch for the fact that it’s a pretty serious challenge ... even getting the pieces out of the box is non-trivial, in fact the first time I tried to unpack it, I wrongly assumed that some of the pieces had swollen and that was what was stopping them from coming out – actually it was just the combination of the shapes and those odd little protrusions getting in the way but it took me a while to realise that ... really interesting packing puzzle that looks like it should be a lot simpler than it really is – disarmingly simple pieces and not many obstructions... but! Thanks Bernhard, and Get well soon!

Puzzlers really are a great bunch, who are not only generous in giving but  also go out of their way to offer support, time and encouragement. So, to my fellow metagrobologists - my sincere thanks for your generosity and kindness.
Here's to another fun puzzling year...
Posted by allard at 18:33