When some Midlands Puzzle Party participants couldn’t make the last trip down to the Puzzle Museum, James Dalgety kindly offered to host another bunch in the New Year – and so it came to pass that another bunch of puzzlers headed south this past weekend. 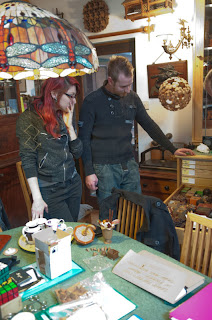 Adin (mental note: as in the mathematical operator, not the country!) brought his fiancée Sophie and Jez brought his son Charlie, Richard Gain joined us from way up north and Kevin took the train down as far as Taunton and I picked him up from there on my drive down from Brum. This time we heeded James’ warnings about low-slung racing cars (Nigel’s Three-series took a bit of a hammering on James’ drive) and not relying on a sat-nav for the bit from Taunton – so I picked Kevin up in the Golf [Ed: which in my world is a completely normal car!] and he navigated from Taunton – he did a great job of navigating us there – unfortunately I did a less good job of getting him back to the station that evening and ended up doing some rather interesting manoeuvres en route – but in my defence, I got him there on time!
When Kevin and I arrived we found most of the others there already and Lindsey was soon plying us with coffee to go with Gill’s choc-chip cookies – they seemed to go down well! (Thanks hon!) [Ed: You're welcome!]
We spent a little while unpacking our humble contributions for James’ amusement (a couple of Stickmen, some Makishi’s and some twisties, along with a box-full of Richard’s micro-cubes) before the first half of the tour began. Even though I’d had the tour last time, I was keen to loiter around within earshot because I love hearing the stories behind the puzzles and what makes them important or unique or interesting to James. When the tour reached the first of the main glass cabinets, there was a noticeable intake of collective breaths when everyone realised that the cupboards underneath the glass cabinets were jammed with drawers that were in turn jammed with antique Japanese puzzle boxes … and it all went downhill from there!
We managed to just about get around the first room before Lindsey announced that lunch was served, so we stopped and feasted on a tremendous spread for a while. There was a lovely laugh from Lindsey when one of the guys asked her if this was really the family dining room – we’d just about managed to clear enough space on the table to fit our plates and drinks among the piles of puzzles and James had adopted his usual perch on his rather nifty fold-up staircase. I suspect that Lindsey’s response was shorthand for “In theory, yes, however….”.
After lunch a parcel arrived for James from a certain German twisty puzzle supplier and it didn’t take long for him to open it and Kevin to recognise the puzzles and make approving noises while James began idly fiddling with his new Gear Pyraminx and Wellness Cube – sixty thousand-odd puzzles in his collection and he’s still genuinely interested in the latest two twisty puzzles that Uwe Meffert has produced – that was really great to see. He’s still enthusiastic about seeing new puzzles and playing with them – and he’s been doing it for forty years – tremendous! When I grow up, I want to be like that too… 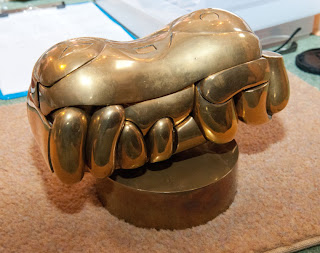 After that little interlude we all lapsed into a bit of puzzling, with some of James’ Berrocals being brought out to play – I’d decided I needed to have a bash at one after spending almost all of my time on a couple of boxes last time so I asked for an interesting one – and after a bit of discussion we settled on Romeo and Juliet, which James duly set down on a piece of carpet in front of me (probably a puzzle mat, come to think of it!). Kevin and Adin set about demolishing (and rebuilding) most of the anvils on one of the side tables – when James removed the first one, he decided that the table needed dusting so they would have to work their way through each one in order to enable him to dust the table properly … which is as good an excuse as any to have to work your way through several highly valuable intriguing puzzles!
While I slowly plodded through dismantling Romeo and Juliet, Kevin and Adin motored through the anvils – every now and then they’d ask James a question or two, and I just plodded along … after a little while I had a mat full of bits spread around more or less in the order I’d managed to remove them – so James wandered over to congratulate me, and mix up the parts a bit – nice chap, eh?

Needless to say, reassembly was significantly harder than disassembly! Romeo and Juliet has a central pair of articulated pieces so the first order of business is reassembling those from their constituent parts and then figuring out where all the other bits go – the resulting process involved a lot of trial and error – usually about which order things need to go back together again because as you progress, you find the articulated bits have less and less movement, invariably this results in having a piece you want to fit in and not having enough range of movement left – so you take a few bits off and then retrace your steps – which is easier said than done – especially the first few times because the pieces are all rather unusually shaped and a bit disorientating – and remember that the two main bits are constantly changing shape as well… a couple of times I thought I was well on my way only to realise that I should have inserted a crucial piece right at the start … and unlike a wooden puzzle, there’s absolutely zero give in these bronze beasts!

It may have taken me the (very) best part of an hour, but I managed to get it back together and remounted (in both senses – this is a Berrocal after all!) without relenting and accepting James’ kind offers of the instruction manual. (Yes, I took that long that he took pity on me twice and offered me the instructions!) Romeo and Juliet is definitely fun as a puzzle – the joints make for an interesting puzzle and it’s a whole lot more than a work of art that doubles as a 3D jigsaw.

At some point Adin and Richard disappeared off into the kitchen with an Opening Bat and they'd made pretty good progress on it by the time I was leaving, so I'm guessing they probably cracked it ...
The second half of the tour kicked off just after that and James took us around the next two rooms in double-quick time. Half way around the second room James fished an interesting bunch of wires out of a drawer and pulled it open to reveal an incredible three dimensional lattice of wires with one of John Kostick’s four axis stars at each intersection – when I mentioned the artist’s name, he promptly pulled out one of John’s single four-axis stars as well – I mentioned it to Jane Kostick in an email that evening she was quite intrigued as John hadn’t made any of those in more than 20 years.
During the second half of the tour I was wandering around absent-mindedly playing with a little Kim Klobucher box and it ended up being my undoing – and becoming the one puzzle that I left behind unsolved that day – it was half open and I couldn’t work out how to go forwards or backwards – totally stumped. (Sorry James!)
After the second half of the tour, Kevin and I needed to beat a reasonably hasty retreat so that he could catch the last train up north as he was on call the next day. Before we managed to escape, James gave me a pile of homework in the form of a number of disassembled burrs that needed reassembly – two of them are 18-piece burrs and to be fair, at least we knew what one of them was called! The second 18-piece burr has pieces that look a bit Altekruse-ish, except there are too many of them, and they’re lopsided – so I have no idea how that one will turn out looking … there’s one with some totally bonkers looking pieces, and another that actually came with some assembly instructions (that one went together nicely, thanks). Tricky thing is that most of them are designer’s prototypes, and I suspect that some of them haven’t been published anywhere yet … so I may need to outsource some of these little challenges to some friends out there in internet-land … you know who you are…[Three days later and I’ve managed to do 3 out of the five so far … particularly proud of the one that turned out to be an unusual offset Oskar design called 2-in-1.] 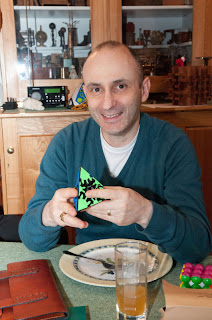 I also picked up a mint condition copy of Edward Hordern’s book on sliding puzzles as I was leaving – I’m going to be in James’ debt for quite some time and may need to pick up several more loads of burrs for reassembly in order to make up for his kindness.
If anything, my second visit was every bit as mind-blowing as the first – Kevin and I were chatting about the privilege of being able to experience the collection, and James’ generosity in giving his time and energy to share it with all of us and the huge responsibility he shoulders in looking after it … now if only one of us would win the lottery so that we can help secure it for the next generation of eager puzzlers…

Thank you James. You sir, are a scholar and a gentleman and we remain in your debt!
Posted by allard at 21:27