Last Christmas I became a very big fan of the Karakuri Club.
The Karakuri Club is run by the Karakuri Creation Group – a group of craftsmen producing a wide variety of puzzle boxes under a communal banner. After you’ve paid a joining fee (Y 6,000 or c.£50), you pay an annual subscription (Y 12,000 or c.£100) which gets you a handsome booklet with photographs and brief descriptions of all they’ve produced over the last few years – handy for compiling a wish list! Your subscription also gives you a Christmas present from one of their craftsmen – and you get to express your preference for which craftsman you’d like. You can then add to your subscription (Y 10,000 or c.£83) and increase the number of Christmas presents you receive and nominate additional craftsmen … and there’s just one catch – you pay up in the first half of the year and have no idea what you’re going to get at the end of the year – chances are good you’ll probably get a work from the craftsman you’ve chosen, but you don’t know what he’s going to be producing this year … sure you can look back at their past works and get an idea of their styles and the sorts of things they’re likely to produce, but there’s no guarantee that your guess will be anywhere near the eventual outcome! In fact, if your choice turns out to be too popular, you might not even get something from your preferred craftsman – you’ll get something from one of the others … if that sounds a bit hit-and-miss, and you’d rather be totally in control of what puzzles you buy, fine – perhaps the Karakuri Club isn’t for you – unless of course you want to make use of the Club discount on all of their products and be able to buy special limited Karakuri boxes that aren’t yet / won’t be available to the general public – so there really is something for everyone. 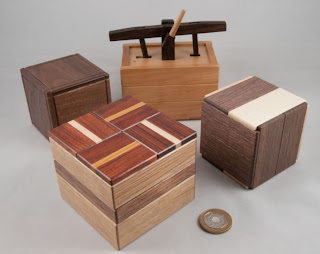 Right, back to last year then – I joined up and decided that I’d just dip my toes in the water and only go for four puzzles :-) – I selected my four craftsmen and included Kamei (you can’t go wrong with a Kamei!), Iwahara (someone who comes up with Box with a Tree and Byway Secret, not to mention King-Cubi, is going to be interesting),  Kawashima (his cubes look really interesting!) and Tajima (who produces presents based on the Chinese zodiac, and this year is the Year of the Water Dragon!).

I duly received my booklet and spent a while trawling through it and making a mental wish list, and then promptly didn’t go and exercise my Club discount at all last year – what a waste, eh? The booklet is a great reference source for anyone interested in their work I’ve found it handy from time to time to check up on sizes or differences between versions of a particular puzzle…around the middle of the year, the Club gets in touch with everyone to confirm their selection of craftsmen and give them one last chance to change or expand their selection – their organisation is excellent!
…and then nothing happens for about 6 months … until a couple of weeks before Christmas when I notice a little speculation on the Renegades forum about when the Christmas presents are likely to arrive, and sure enough, right on cue they begin arriving all around the world just in time for Christmas – so Gill hijacks the package and puts everything under the tree for me, and on Christmas morning I get to open four surprising new Karakuri puzzles – tremendous!

There are some incredible pictures of the logistics involved in packing and shipping these puzzles around the globe on the Karakuri blog over here.

It turned out that I got three out of my four picks – and one from a craftsman I wasn’t expecting, however I will definitely be asking for one of his presents next year! [That’s one of the nice outcomes of the way the Karakuri guys organise this – you might find yourself exposed to some new styles that you wouldn’t necessarily have tried yourself … and sometimes that means you stumble across something really nice!] 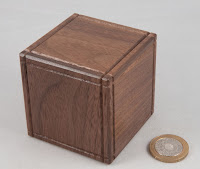 Akio Kamei produced the Rotary Box as his present – it’s a handsome, if not reasonably plain-looking puzzle box made in lovely walnut wood. The side panels of the cube have some interesting patterns that might lead you to believe that the panels slide in a certain orthogonal manner, and while there’s a clue in the name, they move altogether differently to how I was expecting. You need to work out how the different panels interact and how that might be helpful, and there are a couple of dead ends unusual twists along the way, ensuring this is not a simple sequential set of moves where each one opens up the next one and so on…when you do open the box there’s a fair amount of space in there for anything you might like to pop in there… an unexpected and interesting little puzzle. 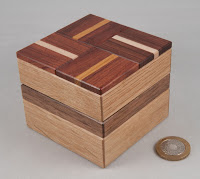 Hiroshi Iwahara produced a variation of his Secret Base puzzle and called it Secret Base 2. There’s a very clear family resemblance and trying the obvious move if you’ve seen the first one, is a good start, but the family resemblance stops there… and it becomes a different little beastie. While there aren’t a lot of moves in the solution, they’re rather nicely hidden and I found myself setting this one aside and then coming back to it a couple of times to try something else before I chanced upon the right combination and sequence – definitely a worthy refinement of the original.

Hideaki Kawashima has been experimenting with variations on this particular theme for a while and Twin was his Christmas 2011 variation. Ostensibly this is a cube with two panels on each face, half of which are light and the rest are dark wood. Some of them move separately and some don’t – some sides are all the same colour and some aren’t … and those are all clues in solving the puzzle … as is the name (which you don’t know when you first get it, by the way) which also alludes to the fact that there are two panels that can be opened, each giving access to half of the innards. 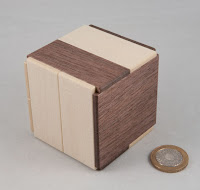 Each side take about 5 moves to open and every puzzler I’ve given it to (including myself) has found themselves in the self-same dead end – the design is such that we all run toward the solution at full tilt and merrily miss what should have been (one of) the finishing posts … however, having done that, we’ve all ensured that the box is thoroughly locked up! This is a great little puzzle for puzzlers and neophytes alike – with an obvious trap for the puzzlers that will confound them for a while! Once this box is open, the insides are a wonderful sight! The amount of work in there and the fine tolerances are staggering – it’s hard to believe that you’ve effectively only paid £80-odd, for something that clearly has a huge amount of work in it!

The last puzzle I got was the one I wasn’t expecting – it’s called Pump and comes from Tatsuo Miyamoto. It looks like an old-fashioned hand-operated pump with the majority of its guts hidden inside the box on the bottom. Miyamoto often makes unusual looking puzzles and is particularly fond of making puzzles in forms where the puzzle mechanism is something that the article itself would be doing, e.g. his Latch Box requires manipulation of the turn-buckle and latch as you might in real life with a metal latch.
T 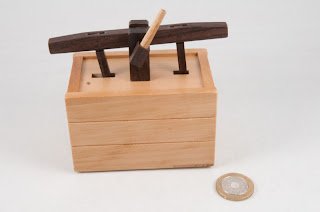 he handles of the pump move up and down in a see-saw fashion and a bit of prodding around on the box shows a spring-loaded panel on the base. This box actually comes with a suggestion that you play with the puzzle on a flat surface – and the base notably has three angled sections to it – which is a handy clue to the likely movements. Solving the puzzle does involve playing in different planes while exercising the pump and there’s a delightful reveal when the final move required releases a drawer in the base that flings itself open.  Very cute and way-out-of-the-ordinary little puzzle – and I think I need to ask for a Miyamoto this year from the start.

If you'd like to see some pics of the boxes open - which may spoil some of the fun, follow the link...

(one side of) Kawashima's Twin Box 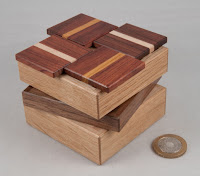 Iwahara's Secret Base 2
(after the first move)