A Pair of Jolly puzzles

In his latest round, Eric Fuller also offered a couple of new Tom Jolly designs for sale – and both looked rather neat, so I added them both to the basket along with the Havana’s #1 box. 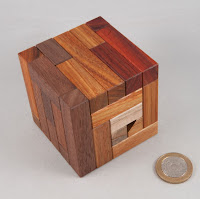 Rattle Box is a deceptively simple-looking take-apart puzzle. At the start it looks like a 5-unit cube although one of the central cubies seems to be missing a corner … that little piece turns out to be almost a 2-unit cube (it’s missing a cubie) that falls inside the 5-unit frame and rattles around a bit.
Once it’s inside, it becomes apparent that the frame is made up of a few oddly-shaped pieces that interlock, and if that little cube weren’t rattling around inside there, it would probably come apart quite neatly – albeit in a serially interlocking fashion.
The frame bits are nicely designed so that they don’t give you an unobstructed view of the insides – which means that you need to experiment with the little cube in various orientations (remember there’s a missing cubie!) and in various places in order to work out what the internal structure looks like. That will enable you to determine which bits are likely to come apart first and then you can concentrate your efforts on removing that bit… 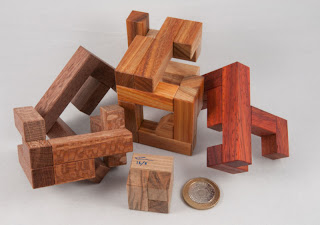 Now either this is a REALLY well designed puzzle, or I was being a bit thick [be nice – put your money on the former!] but I found that I was concentrating on one bit and it was another one altogether that eventually came out first – in fact, I hadn’t even realised that it could move until it was just about ready to come out!
Once the first piece is out, releasing the rest is still a non-trivial exercise – and then reassembling it is actually easier than taking it apart – which in my books makes it an interesting little puzzle.
As always, Eric’s done a lovely job of making these – the tolerances are just right to keep its secrets until you’ve really found the right movements combined with the correct place and orientation of the baby cube. 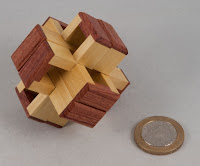 
Eric ships them unassembled – gee, thanks mate! – so it took a little while before I could really enjoy it properly. Eric notes it has a level 7.4.4.4 solution so this one is definitely at the outer bound of my burr-abilities! Disassembly is somewhere between “non-trivial” and “quite interesting” on Walker’s scale of difficulty-ness – there seem to be a couple of dead ends to wander into and while there’s a reasonable amount of movement available during the process, a lot of it isn’t useful, and it’s generally a good idea to keep everything square and properly positioned or you’ll risk introducing even more complications.

Eric has a knack of producing puzzles like this to a delightful scale – small enough to be played with at the fingertips without actually being too fiddly to deal with – and they look absolutely gorgeous (and the price is pretty attractive too!).
Posted by allard at 18:33